Life After Oderus: To Carry On Without their Late Leader, Shock Rockers GWAR Create a New Mythology 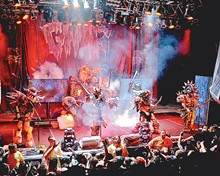 For close to 30 years now, those galactic "Scumdogs" known as GWAR have been touring the planet, making the most of a mythology that they've created about their origins as aliens from outer space. For live shows, they don elaborate outfits that make them look like they stepped out of that cantina scene in Star Wars, and they proceed to splatter the audience with fake blood. The band was dealt a serious blow when its leader Oderus Urungus died earlier this year, leaving the group without any of its founding members

After recently regrouping to perform at the GWAR-B-Q and RiotFest, GWAR has taken a new stage show on the road. New Scumdogs, the Berserker Blóthar and Vulvatron, have joined the group on a tour designed to honor "the fallen" Oderus Urungus. Singer-guitarist BalSac the Jaws of Death recently phoned us to talk about the tour. He kept in character for the entire conversation, suggesting just how difficult it's been for the band to cope with Urungus' untimely death, reportedly of a drug overdose. Rather than talk about his personal loss, he fabricated a story about Urungus' strange disappearance to another galaxy and said the band hopes that he'll return to lead them once more.

Jeff Niesel: You played Riot Fest earlier this year. Talk about what those performances were like and what it was like to play without your leader Oderus Urungus.

BalSac the Jaws of Death: We're in the middle of the Eternal Tour and we're calling it that because we're stuck in a time loop playing the same show night after night. We're forced to relive the night that Oderus disappeared. We're trying to find him every night. Unfortunately, the members of my band don't realize what is going on and they forget that's he's missing so they have to relive the horrible night over and over.

JN: I would think that would be mentally difficult.

BS: For us, everything is mentally challenging. We're from outer space so that has something to do with it. We've been here since before the dawn of man but we still haven't gotten used to how things work here on earth. We're stuck in our aliens' way.

JN: Where were you when you heard the news that he had died?

BS: We were on stage. We will be on stage. It's confusing, this whole time loop thing. We were in the middle of a song on stage and vanished as he got sucked into a wormhole that appears on stage. Oderus disappears through it and one of our ancient friends the Berserker Blóthar comes through. He's pledged to help us in our quest to try to locate him and solve this mystery.

JN: How did you find Vulvatron, the female singer who has joined the group for this tour?

BS: She found us and came through the time portal. She came from the future and says she can help us find Oderus. I don't know if I trust her because she's a woman.

BS: I certainly wouldn't trust a woman from the future.

JN: Talk about the dynamic she brings to the show?

BS: She is a member of our race. But she's more technologically advanced than we are. She is a great warrior. She is a Scumdog warrior. She kicks the Berserker Blóthar's ass during the show. Our nemesis Sawborg Destructo tries to take over as leader of the band and she has to fight him off.

JN: Does she scare you?

BS: Oh, she terrifies me but then all women terrify me. She's the scariest of the whole lot of them.

JN: Talk about the early days when the band first formed in the mid-'90s. What was that time period like?

BS: We're coming up on 30 years now since we were defrosted from our Antarctic tomb and turned into a rock band. In the early days, we were suffering from confusion. For the first decade or so we stumbled around. Our armor was less polished back then. Over the years, some Scumdogs have found a way off the planet. [Former bandmate] Flattus escaped from Earth and maybe Oderus has figured out some way to escape and left us here to fend for ourselves.

JN: How has your music changed over the years?

BS: We've managed to change just by the experiences of what we do. Earlier, we were more influenced by punk and now we are a more legitimate metal band.

JN: How key was it that Beavis and Butthead played some of your music videos on their MTV show?

BS: Those were great guys. I haven't spoken to Beavis or Butthead in over a decade. I'm not sure what became of them. It's good to see that the network smartened up and gave two intelligent young men their own show, but I don't know what happened to them.

JN: When will a new album be coming out?

BS: We will be in honor of our 30 years awake as a rock band on Earth, we'll release a boxset and we've written new material with Berserker Blóthar singing and possibly with Vulvatron singing too. Now, we're just concentrating on this Eternal Tour which — and I'm guessing by the name of it — we could be on it for awhile.

JN: Any great memories from playing Cleveland throughout the past 30 years?

BS: I remember playing the Agora. That was one of my favorite places to play. Cleveland always been very appreciative of GWAR. Some of our most rabid fans have resided there. What's that saying about Cleveland? I can't remember. I think I heard it once on The Drew Carey Show. It's something like "Cleveland rusts."