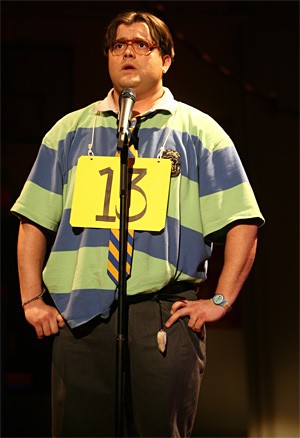 With recent movies about Scrabble champs, crossword addicts, and Donkey Kong whizzes, you'd think the nerds of the world had garnered all the face time possible. But here comes another bunch in The 25th Annual Putnam County Spelling Bee, now at Playhouse Square Center. And while it will never rank as a great musical, the hilarious script and irresistible performances provide an embarrassment of giggle-inducing riches.

And embarrassment is the key word here, as six youngsters (all played by adults) try to spell daunting words while they struggle with weird parental issues, uncontrollable mucous membranes, and the sweet agony of a boy's first ill-timed chubby.

A wild card is thrown into the mix as four audience members, who are preselected in the lobby, compete with the actors. Most audience participation gimmicks like these are painfully cute — or just plain painful — but this one works, since the chosen patrons are kept on a short leash and the cast ad-libs are clever.

The music and lyrics by William Finn — enjoyable and quite serviceable — peak early with the clever title song, which presents a rundown of spelling-bee rules. After that, various musical attempts to reveal character or add depth come off as a bit laborious.

However, the real star of the production is the book by Rachel Sheinkin. This uproarious libretto mines unpredictable veins of humor (one girl is described as the chair of her elementary school's Gay-Straight Alliance). When a kid asks for sentence usage for the word "phylactery" (the leather boxes used in Orthodox Jewish prayers), Panch, played by a wonderfully uptight James Kall, responds with "Billy, put down that phylactery — we're Episcopalians!"

Each member of the dorky, talented cast, under James Lapine's agile direction, etches a memorable character. Roberta Duchak as smarmy Ms. Peretti garners consistent laughs with her fractured mini-profiles of the students, and Eric Roediger makes snot-challenged William Barfee a comic study in high-functioning dweebitude. But that could be said about all the spellers, from Andrew Keenan-Bolger's idiot/spelling-savant, named Leaf Coneybear by his hippie parents, to Dana Steingold's spunky Logainne Schwartzandgrubenierre (her parents are two defiantly unhyphenated men).

Even though Spelling Bee has higher aspirations, touching as it does on the poignancy of dysfunctional families and geek-love, it's the laughter that makes this show spell — wait for it — F-U-N.

Jump to comments (0)
« Capsule reviews of current area theater presentations   |   The woes of Cleveland, on display in Dobama’s Migration »