An interracial couple. A racist cop. You know this will go bad. 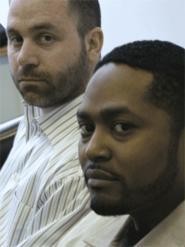 Aric Jackson didn't know a thing about the man who'd just called him a "nigger." Didn't know he was a Cleveland cop. Didn't know he'd been accused of handing out white-supremacist literature in this very bar. All Jackson knew was that he was in for the fight of his life, because his girlfriend was white.

Jackson had always been comfortable with white people. He grew up in Brecksville, the only black face from junior high through high school. He worked as a network engineer at the Cleveland Clinic, where most of his co-workers were white. So he thought nothing of walking into the Castlebar on August 6, once again the only black face in an all-white crowd.

They hadn't planned it. Jackson and his girlfriend, Jamie Cruxton, a single mom who supported two kids by tending bar, were out with her cousin, Amy, who was visiting from Canada. They started the night eating dinner at the 100th Bomb Group, a restaurant near the airport, but it closed ungodly early at midnight. They went to the Castlebar on Lorain Avenue in West Park.

Cruxton had been there before; it seemed nice enough. It's the kind of Irish joint where beers cost a dollar and top-shelf liquor gathers dust. It's also a favorite hangout for the cash-strapped cops who populate West Park, thanks to the city's residency requirement. More often than not, the bar banter resembles a dramatic reenactment of that day's police blotter.

The trio arrived at 12:30 -- when crowd noise was still competing with the jukebox -- and rolled a round of bar bowling. This wasn't the exciting night they had in mind, but last call was fast approaching and there wasn't time to go somewhere else. One more drink would have to do.

They sat at the bar, Jackson in the middle. Then the women left to use the restroom. Two men muscled into their still-warm seats.

The one on the left, a big 45-year-old with a complexion as bad as his attitude, stared a hole through Jackson for several minutes. Jackson did his best to ignore him, watching the TV, taking long pulls from his beer, smoking a Camel Ultra Light. He didn't suspect racism so much as bad manners.

When the women came back, Jackson gave up his stool to let the men sit next to each other. The women noticed the attitudes -- the way the men leaned into their space, claimed it as their own. Then Bad Complexion asked Cruxton a very personal question:

"What do you see in niggers?"

Cruxton had met Jackson through a friend of a friend. They kept showing up at the same parties and barbecues, and eventually started dating. They'd been together for three years.

Which is why Cruxton unleashed a womanly venom, questioning Bad Skin's manhood.

He came back at her, the word "nigger" rolling off his tongue as casually as any curse. "Get this nigger a beer," he told the bartender.

The server, a petite strawberry blonde, slipped Jackson a note. As he opened it, Cruxton snatched it away, thinking it was the bartender's phone number. She left Jackson holding a torn corner.

"I'm sorry for these 2 jerks," the big piece read. "If I thought I could help I would but I don't want to see a fight." Cruxton folded the note and handed it to Jackson, who stuffed it into his pocket.

The man with bad skin leaned into Cruxton, tipping her off her stool. Jackson stood to catch her. The man stood up and kept leaning. "What are you doing?" Jackson asked.

The man's buddy stood up. "What are you going to do about it?" he asked.

The men shoved him. Jackson pushed back, hard enough that Bad Skin stumbled. His friend rushed in. Jackson threw five punches and knocked the man out.

More men jumped in. One tackled Jackson to the ground. Jackson put him in a chokehold and used his body as a shield against the others, who were punching and kicking at any available flesh. The choking man reached up to scratch Jackson's face; Jackson chomped down hard on a finger.

As the other men pulled the choking man up, Jackson stumbled back to his feet. It was a standoff.

But the men had no intention of letting him leave. The bloody finger was the owner's. He motioned for the other customers to leave. Another man drew the blinds and locked the door. "You're not going anywhere," he said. "You had your chance to leave."

"I didn't know if they were gonna kill me," Jackson recalls, "but I definitely saw myself in an ICU."

Cruxton was behind him, frantically calling for help on her cell phone. "There's these five guys trying to jump this one black man!" she told a 911 operator. "The owner won't even let us out the door!"

Jackson reached out in desperation and grabbed the only weapon within arm's reach: an ashtray. "You got a count to three to get out of that door or you're gonna lose some teeth," he told the owner and Bad Skin. "One . . . two . . ."

As suddenly as it started, it was over. The men stepped away. Jackson, Cruxton, and her cousin walked out. As the warm August air hit their flushed faces, they understood why they'd been allowed to leave: The cops had arrived.

"That's the one that started it," Cruxton said, pointing at Bad Skin.

The owner had a different story. "Arrest that nigger!" he shouted to police, according to Jackson.

Jackson reached into his pocket and retrieved the bartender's note to prove who was telling the truth.

The cop looked at it, looked at Jackson's driver's license, and handed back the paper. "You can go," he said.

Just then, Jackson put the two ripped pieces of the note together and, for the first time, saw how it ended: ". . . They're police. "

He surveyed the scene with fresh eyes. The cops were huddled together, talking low and looking nervous. He saw Bad Skin acting casual, as if he were one of them. "He's just standing on the sidewalk, like he was on duty," Jackson recalls.

He had Cruxton drive him to Fairview Hospital, where he was treated for a split lip, loose tooth, bumps, and bruises. Internal Affairs took his statement. It was corroborated by two bar employees who witnessed the fight, according to a police report.

Jeff Powers, the owner of Castlebar, was charged with assault and abduction, for preventing Jackson and his friends from leaving. Patrolman Pete Turner -- knocked out in the opening flurry -- was charged with misdemeanor assault.

The stiffest charges were reserved for the man with the bad complexion, Patrolman William Forrest, a 12-year veteran. He was hit with two felonies -- abduction and inciting violence -- along with misdemeanor assault.

You might expect that the police department would support the accused officers. But fellow cops seem more embarrassed than anything else. When asked about Forrest, Lieutenant Thomas Stacho goes out of his way to say, "We're not defending him," before issuing the standard line of "innocent until proven guilty." And in a Justice Department elevator, Jackson overheard another cop calling it "a stupid way to throw away your career."

But the department cannot plead ignorance. Accusations of Forrest's racism go back six years and can be found in police files.

In 1999, Internal Affairs was told that Forrest was seen handing out white-supremacist literature at Castlebar. And the incendiary charge was made not by a disgruntled crackhead, but by a police commander.

That year, after hearing rumors about white-power graffiti on police-station walls, then-Mayor Mike White launched an investigation into organized racism within police ranks. When asked if he had suspicions about any officers, Commander Charles McNeeley singled out Forrest. McNeeley had a reputable source: his own daughter.

The daughter and her husband were at the Castlebar one night when they ran into Forrest, who allegedly offered them white-power literature. "Listen, why don't you two just take this home and read it," he supposedly said.

After realizing that Forrest was an off-duty cop, she called her father. "[She] thought somebody should be made aware of this guy's operation," McNeeley told Internal Affairs.

Somebody was made aware all right, but nothing ever came of it. McNeeley's daughter was reluctant to submit to an on-the-record interview. Her brother was a cop and was already having trouble with his co-workers; he didn't need the added stigma of being related to a snitch.

The report concluded that there was no evidence to support the allegations of organized racism. No officers were disciplined.

Which doesn't make Cruxton feel any safer. Since the incident, she's been the target of every redneck with a grudge against interracial romance. She's afraid to let her kids play outside. Especially since the letter.

In October, around midnight, she received an anonymous piece of hate mail. "A black with a white girl should be shot and castrated," it read in part. "We will use detectives and police to find you."

Instead of calling 911, Cruxton called her lawyer, Ian Friedman, who himself would later receive an almost identical anonymous threat.

"I don't feel comfortable calling the police," Cruxton says, tears welling up in her eyes. "I feel like every drop of security has been robbed from me."

Cruxton and Friedman have turned the letters over to Internal Affairs, which is still investigating.