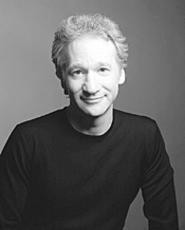 Bill Maher couldn't have picked a worse time to take a break from his weekly HBO series, Real Time With Bill Maher. The live comedy-and-politics chat program went on hiatus in March, just as things were starting to boil in the news. "It was a little frustrating to be off when momentous events were happening," admits Maher, who performs a stand-up show at the Palace Theatre on Thursday. "But we're slowly catching up, with the Abu Ghraib scandal being back in the news. The whole idea was to be on when the political season starts to heat up."

Real Time returned a little more than a month ago, and the former Politically Incorrect host is armed with some fightin' words. "Republicans have a sort of rose-colored view of the world," he posits. "They really fall in love with image and sappy patriotism."

When Terry Blaine swings into town Sunday with pianist Mark Shane and clarinet player Allan Vaché, she'll reconnect with fans who really get her music. "[Cleveland]'s like home away from home for us," says the New York City native. Cleveland radio stations were among the first to play the jazz singer's Whose Honey Are You back in 1993. "We've had support for so many years," she says. As a way of saying thanks, Blaine and the boys will perform Swingin' the Benny Goodman Songbook. "A lot of people don't know that [Goodman] backed up a lot of great vocalists before he had his own group," explains Blaine. "We feature a lot of the great ladies that Benny accompanied in his early career" -- like Billie Holiday, Ella Fitzgerald, and Peggy Lee. Show times are 7 and 8:30 p.m. at Nighttown, 12387 Cedar Road in Cleveland Heights. Tickets are $25; call 216-795-0550. -- Diane Sofranec

And Then There Was Love

Phil Collins promises that his current tour will be his last. But if he's anything like other boomer-friendly artists (like Cher, Kiss, and Tina Turner) who've embarked on farewell jaunts recently, there's a pretty good chance Collins could be on the road for the next, oh, 10 years or so. He's set to release (on September 28) a two-CD, career-spanning collection, Love Songs: A Compilation . . . Old and New (featuring ballads from his solo albums and various movies), which surely will be tapped when he plays Gund Arena (100 Gateway Plaza) at 8 p.m. Saturday. Tickets range from $47 to $87, available by calling 216-241-5555. -- Michael Gallucci