Cleveland Public Theatre's Ya Mama! needs to show us more and tell us less 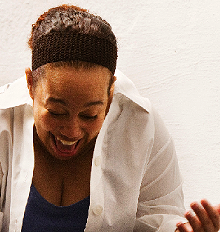 If you believe the message of the M*A*S*H theme song, suicide is painless. But don't tell that to a four-year-old girl whose mother has just chugged drain cleaner. That shocking event is the driving force behind the autobiographical one-woman show Ya Mama!, now at Cleveland Public Theatre.

Directed by Cathy Hartenstein, this 65-minute solo piece is deeply felt and serves as a stunning showcase for Cleveland playwright/actor Nina Domingue's freakish ability to inhabit wildly different characters in a nanosecond. But a flaw at the center keeps the play from resonating as it might.

After their mother's death, Domingue and her sister are raised by their father and eventual stepmother Betty, a frequently abusive woman with a ton of her own familial problems.

That is the fractured maternal background that Domingue carries with her into adulthood. And when she starts having children, she feels isolated by her emotional ignorance, not knowing how to be a mother when she had never really had one of her own.

Domingue shows children teasing her on the New Orleans playgrounds of her youth. She is confused when relatives coo over her, saying she looks, sounds, and walks just like her mother; Does that mean I'm going to kill myself too? she wonders.

Nimbly jumping back and forth in time, the play shows us Nina giving birth to her first child after five days of labor. We observe her "bad girl" phase as a teen and her trauma at being beaten by Betty. And we witness her tentative attempts at mothering her own three children. In these scenes, Domingue portrays a raft of different characters, displaying an uncanny ability to capture a new person with a slight vocal twist and a subtle posture change. For example, she plays a lot of different children, and each one seems complete and distinct.

Although there aren't many amusing moments here, Domingue manages to elicit a few laughs from her over-effusive aunts and some precious moments with her pouty kids arguing in an elevator ("I want to push the button!").

As a playwright, Domingue utilizes a repetitive device based on the idea "Nobody tells you ..." When addressing the audience directly, she continually starts sentences with that thought, expressing her frustration that no one provided the basic information she needed to live, especially with children.

This may explain why, as a writer, Domingue ultimately tells the audience too much in the narrative sections that separate the dialogue scenes. She leaves no explanatory stone unturned, sharing such obvious insights as "I don't have to raise [my children] the way I was raised."

While often affecting and true, these types of analytical or introspective statements don't allow audience members to fully immerse themselves in the story and then reach their own conclusions. At those times, Ya Mama! feels more like a psychodrama therapeutic session in which the patient is required to verbalize what has been learned so far.

One wishes Domingue had used that time to extend some of the too-short scenes where she is doing the mom thing, either well or poorly, with her own kids. Given her expansive chops, those interactions could have given us all the information we needed — but in dramatic rather than descriptive form.

Ya Mama! is a world premiere, having been initially developed through CPT's Big Box workshop series. Any quibbles aside, it's one more reason this theater is far out front in creating bold new stage presentations that demand attention.