Cavs treat the dudes to girlie calendars at Kings game. 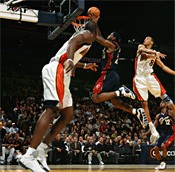 If you've ever wanted to take home a Cavs dance girl, you can get your wish tonight at Guys Nite Out. Sorta. As the team squares off against the Sacramento Kings, you'll score a dance-team swimsuit calendar. And that's about as close as you're going to get to the cheerleaders. "We did a widespread survey in the office. And the results came back that guys like basketball, guys like to eat, guys like going out with other guys, and guys like beer," says Tracy Marek, the team's marketing guru. "We've also learned that people are pretty fond of the swimsuit calendar." The eye candy is part of a four-ticket package that also includes beer, hot dogs, and popcorn. You'll also catch some in-game antics, just like earlier this year, when three dudes, using only their mouths, scooped golf balls from a vat of mashed potatoes. "You'd be surprised how many guys were interested in doing that," says Marek. Actually, we're not. Tip off is at 7 tonight at Quicken Loans Arena, 1 Gateway Plaza. Packages are $105. Call 216-420-2200 or visit www.cavs.com.
Fri., Jan. 4, 7:30 p.m., 2008