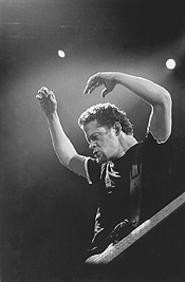 If the first day of the new century was any indication of things to come, we're in for quite a ride from Metallica. Despite the fact that the band has sold out (that's old news, anyway), the hard-rocking giant lived up to expectations, as its concert at Gund Arena was packed with sizzling solos, eyebrow-singeing pyrotechnics, and an unrelenting, never-ending supply of metal. Metallica stirred the crowd into such an electrical frenzy, if you couldn't raise your fist and bang your head at least once, God help you.

Out supporting its recent orchestral/hard rock release S&M on a brief 12-city tour, the band, thankfully, didn't bring along the strings, woodwinds, or horns. After starting with a hardcore cover of the Misfits' "Die Die My Darling," a fiery rendition of "Fuel," and a rather textbook take of "For Whom the Bell Tolls," lead singer James Hetfield, who, with his scruffy facial hair, looked like a werewolf hunched over the microphone, boasted, "We're the cure for your fuckin' hangover." But it appeared most of the crowd -- especially the women who decided to lift their tops to expose their breasts during the downtime before the show started -- hadn't stopped celebrating the new year.

The new track "No Leaf Clover" showcased Metallica's dichotomy, as Hetfield delivered his typically angry vocals to the accessible song, while guitarist Kirk Hammett's piercing, high-pitched wailing brought back memories of the '80s. While heavy metal tunes from the Reagan era -- tracks such as "Blackened" and "Master of Puppets," both of which are considered scripture to diehard fans -- ran together, more recent songs like "Sad but True," "King Nothing," and "Bleeding Me" came off better. Pretty much throughout the show, Metallica could have played anything from its catalog and received a positive reaction. To its credit, it dipped heavily into the earlier tunes. It took "One" to new pyrotechnic heights, with explosion after explosion painting an effective warlike atmosphere. For well over 10 years, Metallica has been known for creating unbelievable excitement and intensity like no other band -- barring death, injury, or breakup, this high-flying group will be on top in the next decade.

While opener Sevendust offered the hardest anti-establishment, underground sound all evening, middle act Kid Rock (Bob Ritchie) made the most out of his 15 minutes of fame. In fact, he succeeded with an unforgettable display of talent, showmanship, and white-trash hospitality. And his set almost didn't happen, as everyone's worst Y2K concerns appeared to come to fruition when the PA system went down as he played "Bawitadaba." What followed was an awkward 10-minute intermission while the panicky crew desperately tried to solve the problem. With an act like Kid Rock, momentum is everything, but the self-described "Devil Without a Cause" came back just as strong once the glitch was fixed. The circus-like atmosphere -- aided by midget sidekick Joe C, two blow-up, four-foot-high Jim Beam Bottles, and go-go dancers in cages -- didn't hurt either.