Give thanks to Ohio City's new Roman-style Bar Cento. 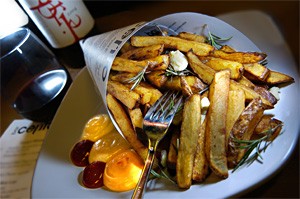 As if we needed another excuse, Bon Appétit recently dubbed the French fry the "indulgence of the year." That might explain why we're so powerless right now, with about 100 of them staring us in the face.

Pulled up to a bare tabletop inside Bar Cento, chef Jonathon Sawyer's earthy new workshop in Ohio City, we find ourselves helpless against their allure, the seduction beginning the moment a sincere (if slightly frazzled) server sets the fragrant little morsels before us, heady rosemary perfume trailing in their wake.

It would be wrong for us to suggest that these noshes represent the peak of Sawyer's culinary prowess. After all, the guy rocked the kitchens at two of Michael Symon's properties, including Tremont's sexy little Lolita and the critically acclaimed if short-lived Parea in the Big Apple. It's a huge score for Cleveland that he returned here to ply his craft.

Nevertheless, my knot of usually chatty gal pals falls silent as we stuff fry after crunchy fry into our mouths, until at last a humiliating combination of satiety and guilt forces us to throw in the environmentally sensitive, post-consumer, recycled brown paper towels that Sawyer provides as napkins.

No matter how tempting, though, diners do not live by French fries alone. Thus, we push on to the rest of Sawyer's brief, focused menu of enoteca-inspired pizzas, pastas, entrées, and rustic bar noshes, an often-heady blend of local artisanal ingredients and Roman sensibilities.

Divided into "traditional" and "modern" stylings, Sawyer's thin, brick-oven-baked 'zas are stunners too, topped as simply or as daringly as desired. (Foie gras and blood sausage, anyone?) We go with the traditional salsiccia, with sweet Italian sausage, fresh mozzarella, and a bit of well-balanced tomato sauce; roasted potato wedges made a hearty $2 add-on. Nor can we resist the modern Sunnyside, an eye-opening combo of trembling shirred eggs in crispy pancetta nests, garnished with freshly ground black pepper. Both offer an irresistible interplay of plush toppings and crisp yet slightly chewy crust.

It doesn't hurt, either, that we discover the perfect partnering wine, a 2003 Louis M. Martini Sonoma Valley Cab, hidden among the 100 or so bottles on the big, annotated wine list. It's the right choice, not only for its soft tannins and dark, jammy overtones, but also for its reasonable $21 price tag. Thanks to a retail license, Bar Cento can sell all its wines to go, at around half off the menu prices; for red-wine fans, this is definitely one worth toting home for other casual dinners.

Meanwhile, for non-oenophiles, there's a lineup of classic European cocktails, including the Negroni and Bellini, and a list of aperitivos and digestivos, like Campari, Sambuca, and homemade limoncello. The vast beer collection from next door's McNulty's Bier Markt is also at diners' disposal.

Speaking of beer, the menu reaches out to suds fans with a collection of "Belgian beer snacks," including the de rigueur veggie burger and a magnificent Ohio premium beef burger on a potato-brioche bun, loaded up with deeply caramelized onions and soft Belgian cheese, ripened in Chimay Grand Cru. On the other hand, a portion of Duvel-steamed mussels tastes surprisingly flat, with a watery broth not worth sopping up with our dense Siciliano bread.

Also somewhat dull is a portion of handmade gnocchi: A Thursday special, the Roman-style dumplings look like marshmallows and taste mainly of mashed potatoes. A brown-butter sauce, with bits of oregano and parmesan, isn't enough to wake up the snoozy flavors. Equally unremarkable: the pumpkin ravioli, which although decidedly al dente, have little pizzazz. Sawyer says he typically garnishes the ravioli with amaretto-cookie crumbs, which would have helped considerably; somehow, though, the crumbs seem to have escaped our portion.

Still, as we tuck into dessert — toasted slices of semolina cake, an authentically European-tasting combo of olive oil, hard flour, and almond flavoring, sided by tiny scoops of amaretto-orange sorbetto — we could hardly feel happier. In a city anchored by a thousand neighborhood bars, Sawyer's sassy, old-world update is worth heaving into the mix. Here's hoping it sticks.