The comic-book Gentlemen have never been more flat.

By Robert Wilonsky
The League of Extraordinary Gentlemen 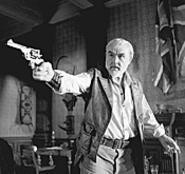 The League of Extraordinary Gentlemen -- or LXG, as Fox refers to it, as though it's the latest Lexus all-terrain vehicle -- would have you think it's the summer action movie with a brain; certainly, its literary allusions would have you believe it has visited more libraries than video-rental outlets. But the movie can't take credit for its smarts, which have been considerably dumbed down for those who believe July is no time for summer school. "Based upon the graphic novel by Alan Moore and Kevin O'Neill," reads the credit, as though 20th Century Fox is ashamed to say its League of Extraordinary Gentlemen comes instead from a mere comic book. Suffice it to say that the comic opts to speak its mind, whereas the big-screen adaptation would prefer to blow your brains out of your ear with a rather loud BOOM. Comic books, which have long suffered at the bottom of the popular-culture food chain, slowly crawl heavenward, while the movies sink further and further into whatever lies beneath the cellar.

Readers of Moore's series, initially about a Victorian Age Justice League cobbled together to retrieve an anti-gravity device, will look at the screen and recognize little of what they see. Instead, they will feel betrayed and bored and -- worst of all -- condescended to; those unfamiliar with the premise will wonder what's the bother at all. The players are all there -- Allan Quatermain (Sean Connery, not Richard Chamberlain), Dr. Jekyll and Mr. Hyde (From Hell's Jason Flemyng), Dracula's Mina Harker (Peta Wilson), and Captain Nemo (Naseeruddin Shah), gathered together to do the bidding of "M" (Richard Roxburgh), head of British intelligence. Alas, there's no villain as memorable as Goldfinger, only a masked, out-to-conquer-the-world Phantom ("How operatic," says Connery), revealed as the conspiratorial villain familiar to the comic's readers -- though in a plot point that's less a shocking twist than a dumbfounding whathefuh?

Yet there have been copious changes, which amount to subtractions by way of addition: Shane West appears as Special Agent Sawyer, the American creation of Mark Twain (though never is his first name uttered), and Stuart Townsend plays the immortal Dorian Gray. They're pretty boys shoehorned into Moore's once-violent and unsightly contingent of criminals and miscreants, sanitized for PG-13 consumption by screenwriter James Dale Robinson and director Stephen Norrington. The League's penchant for violence and villainy has been neutered; they now only do bad things to bad people who deserve it.

Moore's Invisible Man used his transparency to rape and impregnate a manse full of "wayward gentlewomen"; Mr. Hyde, a ton of sinew, gnawed upon the bones of men he ripped to digestible shreds; Allan Quatermain, a shriveled junkie, had retired to an opium den. As for Mina Harker, known in the comic as Mina Murray, she was but a divorced woman hiding her past beneath a crimson scarf; her sin was little more than that of the independent woman, and in the comic, it is she, not Quatermain, who leads the League. Here, she's a bit player -- or bite player, as it were, as Robinson and Norrington render her as a femme Dracula, and not just the former bride of a vampire's playmate.

Robinson and Norrington, whose roots lie deep in rich comic-book soil -- the former resurrected DC's moribund Hawkman, the latter directed the first Blade -- know their changes will gall the fetishists; they are their audience, self-proclaimed purists. But for studio work, better to lure in millions with dumb summer sci-fi than satisfy thousands with a literate adaptation, eh? What they've offered instead is the kind of film that Jerry Bruckheimer, taking this weekend's booty with Pirates of the Caribbean, would have been proud to hoist up the flag pole and claim as his own: a strident barrage of explosions and gunfights and car chases (in 1899, no less).

Lest you think this too much compare-and-contrast, consider that Moore has been suitably adapted: Albert and Allen Hughes transferred his Jack the Ripper tale From Hell into a gloriously grim widescreen story of paranoia and viscera. Though his work has been more often considered inscrutable by Hollywood (no one dares touch his Watchmen), the Hughes brothers proved it's possible to transfer throbbing brain and beating heart from page to screen. Norrington has captured the look: Connery looks like O'Neill's rendering of Quatermain, turn-of-the-century Europe looks ready to collapse into the dust of history, Nemo's tricked-out Nautilus shines like the Love Boat. But he and Robinson forgot the comic's mood, neglected its soul, and ignored its anxiety.

These Leaguers are a good-time gang -- if not lovable, at least likable. They've no pasts (except for Quatermain, here haunted by The Death of His Son, ugh) and barely any present; their only future is that of the sequel suggested at film's end. Moore invested his characters with flaws, with a tangible humanity; God knows they never felt the need to explain themselves, as the film does, rendering it something akin to one long footnote. Here, they're just props designed to shoot at something, punch someone, or explode something, and they are as two-dimensional as, yes, characters on a a sheet of paper.