Can't we all just get in for free? University Circle honors Dr. King with reduced admissions. 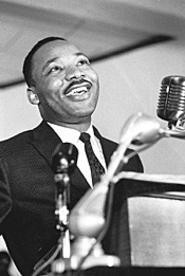 A single mother of four daughters, LaShaunda Brigg can stretch a dollar like a rubber band. If the kids need shoes, the Cleveland fabric-store clerk scours the nearby Payless, looking for the best sale. To furnish her three-bedroom bungalow, she spends weekends checking out the used tables and chairs at thrift shops. And Brigg admits she can feed her brood for a week on three pounds of ground beef. But the money only goes so far. After the mortgage, utility, and grocery bills are paid, there's hardly anything left for a day of entertainment -- especially if it's educational.

But once a year, Brigg and her girls walk the three blocks from home to the Cleveland Museum of Natural History, the first of nine stops in University Circle for the Martin Luther King Jr. Day Celebration. For the past dozen years, most of the venues -- including the Cleveland Museum of Art, HealthSpace Cleveland, and the Cleveland Botanical Garden -- have waived their admission fees in tribute to the civil-rights leader. Two institutions -- the Children's Museum of Cleveland and the Western Reserve Historical Society -- reduce their usual $7 rates to $3.

Free or not, each museum slates a day's worth of family-friendly activities that emphasize African American traditions. At the Children's Museum of Cleveland, Leland Merk and his crew will erect a 10-foot "unity tree" in the lobby. Patterned after the museum's friendship wreath from last year, the tree will make a home for a projected 1,000 construction-paper cutouts of kids' hands. "We've taken a simple bed-sheet and painted a tree on it, and the kids will trace their hands and stick their 'leaves' onto it," explains Merk, the museum's operations director. "When it's completed, it'll have handprints of all different colors on it."

Across town at the art museum, the day starts with a screening of Skin Deep, a one-hour documentary about racism on college campuses. The flick is followed by an afternoon of mask-making workshops, a performance by African Drum & Dance, and gallery tours of the museum's African American art collection. At the Western Reserve Historical Society, archivist Nishani Frazier will teach museum patrons civil-rights songs, and a panel of experts will talk about the 100th anniversary of the NAACP's ancestor, the Niagara Movement.

Inside the Cleveland Museum of Natural History -- where the celebration is called Discovery Day -- staff scientists will display artifacts, from moon rocks and beetle exhibits to remnants of glaciers that shaped Ohio's landscape thousands of years ago. "We'll have our archaeologist out," says Marie Graf, the museum's marketing director. "The geologist will be out. Our entomologist -- the bug guy -- brings out all his bugs. It's for families who don't know what to do with their kids on their day off."

And it's all free. "We're targeting our neighborhood -- the children who live right in our backyard, who normally don't come to our museum," says Graf. "It's open to anybody in the community."