Filmmaker documents the end of the Aileen Wuornos story. 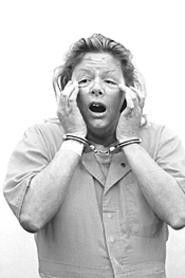 Twelve years ago, filmmaker Nick Broomfield made a documentary about convicted murderer Aileen Wuornos. The movie, Aileen Wuornos: The Selling of a Serial Killer, painted unflattering portraits of the mother, lawyer, and police who pocketed cash in the wake of Wuornos's arrest. On the heels of Monster, which netted Charlize Theron an Academy Award earlier this year for her portrayal of Wuornos, Broomfield's released another film on the subject. Aileen: Life and Death of a Serial Killer completes the story begun a dozen years ago.

"In my naïveté, I always thought we would learn some facts [in a second film] about the first murder that never came up in the trial," Broomfield explains. "It's complex. She just can't be dismissed as this odious, evil person."

Life and Death documents the last few months of former prostitute Wuornos, who was sentenced to death for murdering seven men in Florida in 1989 and 1990. She tells Broomfield on-camera that she didn't kill in self-defense, as she'd claimed earlier. But Broomfield believes that after 12 years on death row, she just wanted to die. (Later in the film, when she thinks the camera is off, Wuornos says that she was acting in self-defense. She was executed several days later, on October 9, 2002.) "Her mental state had really deteriorated," he says. "She was paranoid. She was psychotic. And she was having schizophrenic episodes.

"I believe that she felt she was acting in self-defense. I think she was no longer able to tell the difference between a life-threatening situation and a different situation. She was abused all her life, and her way of dealing with the abuse was to become increasingly angry and increasingly out of control."

As for Hollywood's take on Wuornos, Broomfield praises Theron's performance, but finds little else to recommend in Monster. "The film was limited in the issues it addressed," he says. "Charlize transcended what would otherwise be a TV movie."

Broomfield himself is no stranger to controversy. He also made 1998's Kurt & Courtney, which posits that Courtney Love had Kurt Cobain killed, and 2002's Biggie and Tupac, which connects the Los Angeles Police Department to the two rappers' deaths. And unlike conventional documentarians, who do their work behind the camera, Broomfield places himself at the center of his stories. "It's really [like] the new journalism of Tom Wolfe, who felt the situation of getting the interview was as relevant as the interview itself," he says. "Often subjects define themselves by the difficulties they place in your way or questions they won't answer.

"I think documentaries are all about an acknowledgment of the reality that you're working in, which obviously includes the people behind the camera and the way in which they affect the behavior of the people in front of it. For years, documentary filmmakers have pretended that they don't exist, that these people are being observed by the hidden eye of a camera."