With Zeke and Sounder. Sunday, October 9, at Peabody's. 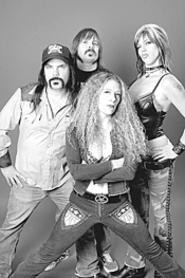 Your biggest concern after listening to Nashville Pussy's latest, Get Some, is whether your shower afterward ought to be hot or cold. Kicking up a miasma of filthy noise and musky lust, Nashville Pussy's fourth disc veers precisely zero degrees from its headlong rush into the depths of Dixie-fried porn punk. Still, the disc packs some soul food into its Skynyrd-lined, Motörhead-bloated gut: "Pussy Time" proudly lifts the riff from Edwin Starr's "25 Miles," and there's even a funky, if slightly flattened, cover of Ike and Tina Turner's "Nutbush City Limits." And Blaine Cartwright's couplets on "Lazy White Boy" ("A bag of weed, a six-pack of Bud/I'm like a pig in my own mud") are as close to a manifesto as these guys have ever gotten. Thin production makes the sleaze feel a bit pasteurized at points, but Get Some is still a shining, shit-splattered example of the lewd and lowdown Nashville Pussy tradition.
Scroll to read more Music News articles
Join the Cleveland Scene Press Club