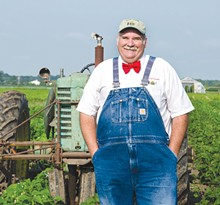 For the past two years, the annual Roots Conference has drawn national audiences to Ohio to examine and challenge the role chefs play in the food system.

On Sept. 21 and 22, chefs, farmers, writers, scientists and food enthusiasts will again gather at the Culinary Vegetable Institute in Milan, Ohio, a non-profit arm of the Huron-based Chef's Garden, as speakers tackle global issues on this year's theme: "Taking Action." Topics will range from ethical labor and honoring Native American culture to how seaweed could change the dining landscape.

Keith Martin, founder of Elysian Fields Sheep Farm, will deliver the keynote speech and Dr. John Sanzo of the popular website Docsconz will serve as emcee.

This time around, founders Farmer Lee Jones of Chef's Garden and journalist and author Jody Eddy want to arm attendees with a weekend of tools and knowledge to keep the momentum going long past the usual post-conference buzz.

"We are all a part of the food world whether we are a home cook or a professional chef," says Eddy. "I believe that more chefs today realize that they can make a profound and positive impact on the tremendous issues that we face by the choices they make and the work they choose to undertake."

It's more than just lip service. Roots plans to actually set all that talk into motion. On Monday, Jordan Figueiredo, who founded the viral Ugly Food and Vegetable campaign highlighting the fact that 20 to 40 percent of all food is disposed due to grocer cosmetic standards, will lead a discussion on finding solutions for the global food waste crisis. That night's dinner focus will be "Perfection in Imperfection" and center on creating meals from overlooked ingredients.

"Every single thing we do will revolve around a purpose," explains Farmer Jones. "The food that we eat, the water we drink. It's all about the message."

On both mornings, that message starts with the fundamentals. A panel entitled "It Begins at Home" finds Gavin Kaysen of Minnesota's Spoon and Stable and Seamus Mullen of New York City's Tertulia detailing the positive changes they've made in their personal lives and the influence it had on them as chefs. Tuesday starts by delving into the idea of chef as activist. Now more than ever, says Farmer Jones, chefs feel they have a responsibility and an opportunity to make a difference.

In light of the uptick of interest in fermentation, Kevin Farley of California's Cultured Pickle Shop and Edward Lee of Kentucky's 610 Magnolia infuse plenty of culture into their talk on the constant "action" that takes place during fermentation's transforming process.

But as a conference uniting attendees in a region surrounded by the Great Lakes, it's the closing panel that may resonate the most. Buey Ray Tut, a native of South Sudan, will speak on the sustainability efforts of the project he co-founded, Aqua Africa. Since its inception in 2011, the organization has drilled nine wells in Tut's home town and brought water to thousands of people.

"He's saving lives on the frontline," says Eddy. "I can think of no better way to take action than that."