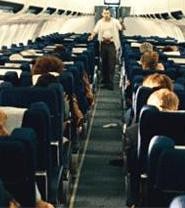 United 93 (Universal)
A suggestion to those who've put off watching the year's most wrenching and essential film: Before rolling the feature, first watch the documentary in which the families of those who died on the plane give the filmmakers their blessing, without reservation. If the mother, father, and sister of Richard Guadagno can meet with actor Daniel Sauldi and share with him intimate details of a man's short life, then there is no excuse for those who merely watched in horror from a distance. Paul Greengrass' vérité look at that terrifying day evinces equal parts compassion and anger; it's as much a personal tribute as a political statement, and more effective for it. I never wanted to see this and have watched it a handful of times; it wrecks you, absolutely, just as it infuriates and even uplifts. -- Robert Wilonsky

District B13 (Magnolia)
Think of parkour as a sort of applied gymnastics, a new French sport that involves leaping and bouncing around urban environments. In the hands (and feet) of creator David Belle, who stars in this martial arts pow-fest, parkour is breathtaking to watch. Too bad every scene not involving jumping or kicking is full of the goofiest shit possible. Belle plays one of those movies-only gangsters who doesn't actually commit any crimes. But when the bad guys kidnap his sister, turn her into a junkie, and then steal a neutron bomb, it's superfeet to the rescue. Almost. The filmmakers have assumed that the plot is worth interrupting valuable kicking time for. So you'll swing from glazed-eyed boredom to gee-whiz and back over and again. But set your brain on stunned, or just watch the parkour-packed special features, and enjoy the jumping. -- Jordan Harper

Shock Treatment (Fox)
Twenty-five years later, only the most devout fans recall this sorta-sequel to The Rocky Horror Picture Show; Barry Bostwick wasn't available, Susan Sarandon and Tim Curry weren't interested, and not even creator Richard O'Brien could be bothered to show for the commentary track, which is left to two fan-club presidents with nary a bad thing to say about a very, very bad movie. It's an interesting artifact, at most -- an early glimpse at the work of Barry "Dame Edna" Humphries and Jessica Harper, say. It's probably more prescient than Rocky Horror, give it that; turning small-town Denton into a TV soundstage was a clever, prophetic gag. But Shock Treatment was anything but shocking compared to its predecessor; fact is, it was a downright drag, which is ironic when you think about it. -- Wilonsky

Gojira (Toho)
There's now a whole generation of children who think Godzilla is a Matthew Broderick movie. While euthanizing them all and calling it a wash might be your first instinct, Toho has come up with a more humane solution. They've put in one box all the Godzilla a body ever needs -- namely Gojira, the 1954 Japanese classic, and 1956's American cut of the film, which starred Raymond Burr to take the emphasis off all them foreigners. Today it's hep to dismiss the Burr version; the original certainly has more emotional resonance, with its focus on the ravages of nuclear war that for some reason the American version glosses over. On the other hand, it's a freaking rubber lizard stomping on li'l buildings and tanks, which the U.S. cut plays to the hilt. And if your kids still prefer the Broderick version, you know what to do. -- Harper