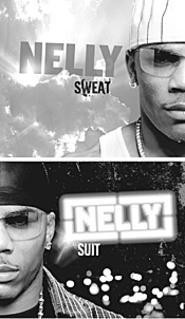 The official line on Nelly's two new albums is that Sweat caters to the street, while Suit reveals his softer side. It's an amusing thought -- especially the idea that the St. Louis rapper, who's made his fortune as a Band-Aid-wearing, R-rated version of Will Smith, has street bona fides that need burnishing. The truth behind the marketing gimmick is that Sweat is mostly the same old Country Grammar, while Suit sets Nelly's sole ambition -- becoming the planet's biggest star -- to a variety of market-tested pop.

Which is not to write off either disc; contained within Suit's saccharine rush is an engaging desire to cross musical boundaries. Unfortunately, the most daring moment -- Tim McGraw's through-a-megaphone cameo on "Over and Over" -- is more interesting in theory than its Babyface-style results. And while there's no shortage of hooks and guests, the sticky melodies overwhelm Nelly's own singsong chants and obscure his alleged lyrical improvement (it's worth noting that the phone intro to "Die for You," for example, is more moving than the subsequent tribute to his son).

That makes Sweat, for all its familiarity, the better of these two collections. Beginning with a rousing gridiron pep talk, its listener-friendly tour of hip-hop's heartland comfortably restates the virtues of crunk and Midwest swing. By balancing the misogyny of "Flap Your Wings" against sizzling strong-woman duets with X-Tina and Missy Elliott, it might also be a better example of the artistic growth Suit slickly -- if not quite accurately -- proclaims.