The Iron Chef triumphs, but Symon & Co. party on. 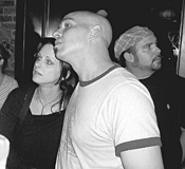 Defeat wasn't such a bitter pill to swallow for Michael Symon, chef-owner of Lolita and Lola, thanks to the support of nearly 100 rabid fans who gathered at the Southside in Tremont to watch Symon's Sunday debut on the Food Network's Iron Chef America.

Team Symon fell to Iron Chef Masaharu Morimoto, with a final score of 53.5 to 44 out of a possible 60 points. Symon and his boys, including chefs Frank Rogers and Matt Harlan, taped the show in New York last spring. But because of a million-dollar gag order, even Symon's parents (who watched the show at home with friends) didn't know the outcome until it appeared on TV.

The gang went into the taping with battle plans firmly in place. The only thing they didn't know in advance was the "secret ingredient," which turned out to be -- ta-da! -- asparagus. Their five-course feast, whipped up just seconds shy of the full 60-minute time allotment, included lemon and egg soup with white asparagus puree, Greek-style asparagus "sushi" garnished with crisp asparagus tempura, asparagus-ricotta gnocchi in asparagus-pistachio sauce, and lamb loin with roasted asparagus and goat-cheese-stuffed phyllo pastry. For dessert: asparagus churros tossed in cinnamon sugar.

Passions ran high at the Southside, as the crowd alternately screamed its support of Symon, booed Morimoto, and mocked celebrity judges Ted Allen, Jeffrey Steingarten, and Karine Bakhoum. "That Queer Eye Ted likes you!" friends hooted during an especially dewy-eyed bit of feedback offered by Allen. "He likes you a lot!"

"It was awesome," Symon says of the experience. "I'd do it again in a minute."

The episode repeats October 6, 7, 8, and 9; find the times at www.foodnetwork.com.

The other Little Italy . . . You might think a restaurant named Maggiano's Little Italy would be located somewhere in the vicinity of Murray Hill and Mayfield Road. But no. Maggiano's version is snuggled into tony Beachwood Place (26300 Cedar Road), in the middle of the space where Eddie Bauer once stacked crewneck sweaters. Sadly, while independently owned restaurants in our real Little Italy are hurting, chain-linked pasta palaces in nearby Woodmere and Beachwood are whooping it up -- mostly because Maggiano's is a true convenience for Beachwood Place shoppers, who have been without a full-service restaurant since Mad 4 You closed in 2004. More important, Maggiano's food is pretty darn good, and its casually elegant ambiance avoids crossing the line between clever and kitschy.

Executive Chef Tim Malone seems like a nice guy too. Prior to moving to Euclid, he ran the Maggiano's kitchen in Indianapolis, where he says al dente pasta was a much harder sell than he expects it to be in Cleveland. (Hey, we take our props where we can get 'em!) His favorite dish on the big à la carte menu is lasagna, made with hearty Italian sausage ($13.95). We're all about the mostaccioli, with its rich, unctuously rounded eggplant marinara ($13.95). Portions are intentionally oversized, for sharing; half-orders are available for most dishes, if you have no friends.

Maggiano's is owned by Dallas-based Brinker International, whose other concepts include Chili's and Macaroni Grill. If history teaches us anything, it's that the place will be packed. Reservations, at 216-755-3000, are a very good idea.

Tiny bubbles . . . We used up most of our jokes the first time Titanic sunk; that was in 2004, when it was docked in the Warehouse District. This time, we'll just tell you that the relocated restaurant has gone down again, with the Lakewood ship abandoned since mid-September. There was one survivor, though. Executive Chef Brian Davis has bought the nearby Lakewood Beverage & Deli (15512 Madison Avenue; 216-521-9530), where he's cooking up a raft of daily carryout specials like chicken paprikash, beef goulash, and wienerschnitzel.

Lost in Roma . . . The September 21 Side Dish gave the wrong address for Caffé Roma. Joe and Carolina Coreno's restaurant can be found at 13000 Lorain Avenue.