Cleveland State thinks its hot start was a sign of things to come. History disagrees. 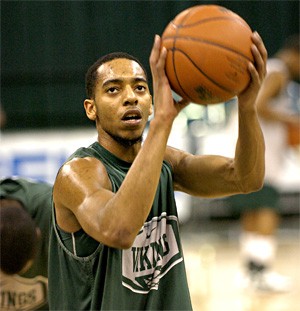 Something strange happened during a recent Cleveland State basketball game: People cheered. Kids thrust green balloon swords into the air. Grown men, proudly donning Vikings helmets, flung their arms around wildly. And the pep band played what sounded a lot like a fight song — a blast of horns that for once didn't ricochet hollowly off empty seats.

Five thousand fans piled into the Wolstein Center that night, to watch Cleveland's veteran college-hoops doormat push its league record to 7-0. And a good chunk of those fans were actual CSU students, not just camera-wielding parents of the cheerleading squad. "We're finally giving them something to be proud of," says Lee Reed, the school's athletic director and a former Vikings basketball standout.

It's been a while since Vikings fans had reason to blow their Norse horns. The program peaked in 1986, when Coach Kevin Mackey led the Vikings to an upset victory over Bob Knight's Indiana Hoosiers and into the NCAA tournament's Sweet 16. But fours years later, in the summer of 1990, a news crew caught Mackey emerging from a crack house with a prostitute on his arm. Not exactly the behavior of a dynasty builder.

Some predicted it would kill CSU hoops, their shot at a perennial winner gone with a snort. Three years later, though, the squad went 22-6 and won their league of gritty Rust Belt universities. "But that was only a brief spike," recalls Tom Tontimonia, a 28-year veteran of the CSU athletic department. "And it went away when a great young man was killed."

In 1995, star guard Jamal Jackson was stabbed to death in his native Boston during the off-season. The Vikings went 5-21 that season and have logged two winning years since. Not even Rollie Massimino, who led Villanova to an NCAA championship in 1985, could build beyond the mediocrity. Hired in 1996, his seven-year tenure is best remembered for two players robbing the Indians' C.C. Sabathia at gunpoint.

In 2006, after three more years of church-league-level ball, the school put its faith in another new boss — a smiley, gap-toothed man from Detroit. Gary Waters had made his name as the head coach at Kent State in the late 1990s, leading the Golden Flashes to three straight 20-win seasons and two NCAA tournament bids. That landed him a job at Rutgers, where he led the Scarlet Knights to three NIT tournaments.

But in leagues like the Big East, 79-74 in five seasons doesn't satisfy the boosters. Waters was forced to resign. CSU's Reed had worked with Waters at Kent State. When he found out his old colleague was available, he snapped him up.

At 56 years old, Waters embodies the cult persona of a college basketball coach, right down to his wingtip shoes. He peppers his speech with John Wooden-inspired maxims and expounds endlessly on toughness. "And you can be sure that you won't find Coach Waters coming out of any crack house," assistant coach Larry DeSimpelare says of his boss, who's prone to prayer and has a wife of 34 years.

In rebuilding CSU, Waters has filled his roster with unremarkable but scrappy recruits. He's drawn to players skilled at defense and rebounding, and chases kids who played for winning programs, like senior guard Breyohn Watson. He came to CSU after snagging a junior-college title in Michigan.

The presence of a new, defense-oriented coach was obvious last season, when the Vikings often struggled to score 60 points, and finished just 3-13 in the Horizon League. This year's team wasn't expected to do much better; the league's coaches picked it to finish second-to-last. But while CSU still struggles at times to score, its almost-maniacal dedication to disrupting opponents' offenses has left fans, at least until recently, dreaming of a postseason bid. The Vikings now sit at a respectable 14-9, including an upset win over then-12th-ranked Butler that grabbed headlines from coast to coast.

Perhaps more telling, the success has gotten the attention of CSU's own students. The campus bookstore saw a 20 percent spike in team-apparel sales following the win over Butler, a store manager said. And in the school's admissions office, recruiter John Learned says there's hope for the spring recruiting season, when a winning team could provide yet another item of awesomeness to sell.

Learned's right: A winning season in a sport like basketball sells a school well. In 2003 and 2007, Butler took trips to the Sweet 16, and the school set records for freshman enrollment in the following years. "It brought tremendous notoriety for the school," says Jim McGrath, Butler's sports information director. "People now recognize us outside the state."

But Butler — like many other small-conference teams that have managed to build consistent winners — is a private liberal-arts school with a vibrant campus. At CSU, Waters has to recruit players to a commuter school in one of America's poorest cities — a place where campus life is so unlively, the school lists its proximity to Slavic Village among its campus highlights. The average age of a CSU student is 25. The school accepts more juniors than freshman every year. No matter how much they win, it's hard to convince recruits they'll be big men on campus when there's no campus to be big on.

"It's really hard for a mid-level commuter school to have success," explains Marlen Garcia, a college-hoops writer for USA Today. "A lot of times you see teams have a breakthrough year, like CSU had in the past. But maintaining it is really hard. I'm not saying it can't be done. But it is an uphill climb."

CSU President Michael Schwartz knows his school will never be a place of ivy and brick. But he hopes some renovations can give the campus a more residential feel. By 2011, he says, CSU will have brand-new buildings for its education school, student-life center, and dorms — nearly $250 million in upgrades. An actual campus, the theory goes, will draw both athletes and the face-painted fans to support them.

For now, though, the Vikings retain the feel of a team very capable of collapse. Since their wins against Valparaiso and Butler, four straight losses have deflated their grand visions of becoming the next Gonzaga. As one longtime Vikings fan lamented at a recent game, his smoker's breath reeking of cynicism: "This team is the same as all the other ones. The only difference has been that win against Butler."

That could be true. But an hour or so later, after the final buzzer had rung and the Vikings had vanquished Valparaiso, 5,000 fans seemed to disagree.