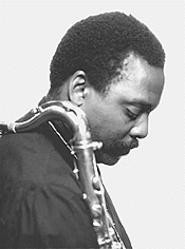 David Murray: A young elder statesman.
Since his migration from the gospel and funk of his Bay Area adolescence to the freeform loft scene of New York, tenor saxophonist and bass clarinetist David Murray has amassed a prodigious discography -- the majority of it under his own name. His volcanic tenor and popping, agile bass clarinet have been recorded in so many situations and with so many different musicians that some critics have been tempted to compare him to Sonny Stitt, the hardest traveling horn man in the bebop business.

But as critic Gary Giddins has rightly pointed out, Murray's work stands well above Stitt's often throwaway competency, simply because Murray has recorded so many stellar, sure-footed albums, ranging from earlier recordings like 1980's Ming and 1987's The Hill to more recent accomplishments such as 1996's Dark Star. With octets, trios, big bands, and funk bands, Murray has played free jazz, bebop, swing, gospel, and even the music of the Grateful Dead. He's shown that he can record like a madman and still reach the pinnacles of improvisational music.

Against this great pile of Murray recordings, however, 1996's Fo Deuk Revue (the term "fo deuk" is Wolof for "where are you from?") -- the album Murray is highlighting on his latest tour -- doesn't compare particularly well. A chugging bass, lifeless keyboards, and a phalanx of musicians, rappers, and poets make forgettable music, edging out the disappointingly peripheral interjections by Murray in the process. Murray sounds like a sideman on his own album. Nevertheless, he felt strongly enough about the music at the time to describe it in the liner notes as "a political statement about how I perceive the world" and his "most significant achievement." Murray still holds those opinions as he prepares to bring his Fo Deuk Revue, a group consisting of both African and American musicians, across the Atlantic for a U.S. tour. All this begs the question: Why does Murray still have Fo Deuk on his mind?

"Fo Deuk is a statement of where I am right now in my life and where I've always wanted to be," he says via phone from a tour stop in Holland.

Murray admits that Fo Deuk was not particularly innovative musically. Nor was it a departure from his own past work -- he's been interested in African music from the beginning, and in past years, it's become especially prominent. (Consider his "M'Bizo Suite," recorded with the World Saxophone Quartet on the album M'Bizo, as a more engaging example of Murray's Afro-jazz fusion.) Perhaps Murray continues to be obsessed with Fo Deuk because it's not just another album for him. One reason for the attachment is political. After all, Murray has a defined agenda working behind the project.

"To me the big problem with the world, and with Africa in particular, is that we need more people to bring different countries together," he explains. "Mandela's been good in that regard, Desmond Tutu [also]. We also need young people to try to be the glue that holds it all together. We need to get beyond the tribalism, wars, and the effects of colonialism, and move on towards an Africa that can be more united, so they would be able to fend for themselves, so they could extract their own oil and their own uranium, and be their own import/export companies instead of always having to rely on the neo-colonialists, who pretty much ransacked the country and left. That's where I stand on that, and the CD pretty much says that. I think that people like me or even unlike me, if they're of African descent, should care about this continent and perhaps do something more than send slogans every ten years."

In a particularly blunt maneuver, Murray underlines his point on Fo Deuk Revue with vocal interjections from guests like Senegalese rapper Positive Black Soul and renowned author Amiri Baraka. But to ascribe purely political motivations to Murray is to miss the larger and more personal motivation in his more recent endeavors. While politics may have something to do with it, Murray still thinks like a musician.

"The thing is that, as we get older, we're beginning to be elder statesmen now," says Murray. "I'm maybe a young elder statesman, but they consider me one of the old guys. [With that position] comes a certain role. I'm pretty much drawn into the position to help other people, and when I have the opportunity to help someone, I always take it, because it makes me feel good."

Of course, Murray will continue with the projects the jazz world considers business as usual -- he already has begun work on a duet album with Andrew Hill and a Coltrane project with the David Murray Octet. But his paradigm has shifted; he has left a mark on the music, and now he has the opportunity to help others do the same. While Murray has no plans to repeat the lineup from Fo Deuk, he will instead set his tenor aside and help produce an album for Dieuf Dieul, the Senegalese band he assimilated en masse into his Fo Deuk Revue.

"Actually, I wish I could produce more things," he says. "During this time, [production] is really where my head's at. I hear a lot of talent out on the street, but I don't see the concept. And for me the concept was really never a problem. I see raw talent everywhere, and sometimes I just want to put an umbrella over it and just hold it there -- not for me to come up with the concept, but to help them come up with their own concept of who they want to be and what they want to sing."

Fo Deuk Revue may have been a cautious, awkward first shot ("On Fo Deuk II," he concedes, "I would go further into improvisation"), but it stands as a blueprint for Murray, who is still every bit willing to jump to the center of a musical maelstrom, but who also finds contentment in guiding from the wings. In fact, since the release of Fo Deuk Revue, Murray has managed a much more organic world fusion sound -- check out last year's Creole -- and found the opportunity to play quite a bit with Fo Deuk.

"It's gotten more fluid," he says. "We've learned the songs and we've experienced them performing in front of people, so it [the live show] is probably going to be much looser than it sounds on the CD."

For the performance at Wilbert's at the Diamondback on Friday, Murray will bring a stripped-down version of Fo Deuk. The fewer the people, says Murray, the greater the room for improvisation. And with only a guitar, voice, hand drummers, and Murray's tenor slated for the show, there should be plenty of room for anything Murray might have in mind -- and it could be quite formidable.