The battle of the badasses spills into Scene Pavilion. 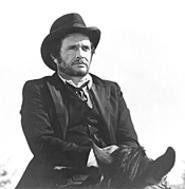 One of country music's finest outlaw anthems is David Allan Coe's "Willie, Waylon & Me." Of course, one man might take exception to the tune: the archetypal country cuss whose name goes unspoken in Coe's song.

That'd be Merle Haggard. Having scored 38 No. 1 country hits, Haggard helped create the market for rough-and-tumble honky-tonk with a sound as unruly as his upbringing. Coe hasn't come close to matching Haggard's commercial success, but he's enjoyed a career boost of late by touring with Kid Rock, and he's long been quite the hellion himself.

This Friday, two of country's most intimidating personalities will play a special one-off show together at Scene Pavilion. Who's the bigger, badder dude? Read on.

Haggard: Born in Oklahoma during the Great Depression, before his family relocated to California. He grew up in a boxcar that his parents turned into a dwelling.
Coe: Born in Akron in 1939 to a Mormon father and an Amish mother. Li'l David never took to Bible-thumpin', though he once briefly converted to Mormonism just so he could practice polygamy.

Haggard: Started making the rounds at various detention homes by age 14 and turned 21 in San Quentin after a botched robbery: He and two buddies got drunk one night in Bakersfield and decided to knock off a local restaurant. Thinking it was 3 a.m., they tried to pry the back door open and sneak in, but were too shitfaced to realize that it was only 10:30 p.m. and the place was still full of staff and customers. Haggard was sentenced to 15 years, but got out in 3.
Coe: First jailed at age 9. He spent 20 of his first 34 years behind bars, mainly for petty crimes, though an armed robbery conviction put him away for most of his 20s. He claims to have been on death row for a time after killing a fellow inmate. (Too bad Kid Rock never pissed him off.)

Haggard: Never bought into Nashville's separatism. In 1969, he tried to release "Irma Jackson," in which he boasted of being the lover of a black woman. Capitol Records refused to release the tune.
Coe: Loves to turn prejudice into profit. A pair of highly explicit underground albums cut in the mid-'70s included anthems like "My Wife Ran Off With a Nigger" and "Nigger Hatin' Me." He's since disavowed his racism, pointing out that he tours with a black drummer. He still sells the offensive CDs on his website, though, and plays a guitar emblazoned with a Confederate flag, despite being from friggin' Ohio.

Haggard: At age 63, signed with ANTI, a division of punk powerhouse Epitaph Records (Rancid, Pennywise), and released his finest album in over a decade, 2000's If Only I Could Fly. His deeply lined face may be a road map of hard times, but his beautiful burlap voice still resonates like the crack of a Smith & Wesson.
Coe: Mostly fires blanks these days, having drifted into self-parody. The last time we saw him, he took to the stage in a full-length mink coat, complete with dreadlocks and a pimp cane, and started his show by rapping. "If that ain't country, I'll kiss your ass," Coe sings in one of his most infamous tunes. Better start puckering up, Dave.

Being a bigot doesn't make you a badass. Coe has penned some great country anthems ("Take This Job and Shove It," "Jack Daniel's, if You Please"), but by doing an about-face into hillbilly hip-hop at the end of his career, this onetime legend has become a rebel without a clue.

Haggard, on the other hand, has adapted his sound for no one. "I'm goddamned glad they don't play my shit along with that other crap," he once told The Austin Chronicle, responding to country radio's refusal to play his songs anymore. Country music has sure changed, but Haggard never will.