Owen Wilson’s a bad fit for an ass-kicking bodyguard in Drillbit Taylor. 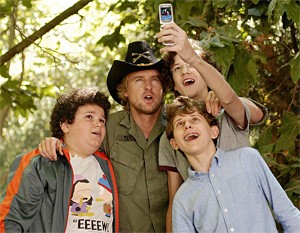 Rare is the star-vehicle that is as poorly matched to its star as Drillbit Taylor, which casts Owen Wilson as a homeless army deserter and con man, able to fool people into believing he's both a substitute teacher and a master of hand-to-hand combat. It's a part that requires bluster, and Wilson's laid-back delivery just doesn't work.

It's easy to believe he'd be homeless and lounging around the beaches of Santa Monica all day, but impossible to buy him as an ass-kicker — or believe that anyone else would — though if you've seen his would-be action-hero turn in Behind Enemy Lines, you already know this. Seth Rogen co-wrote the screenplay with Beavis and Butt-Head scribe Kristofor Brown, and it's easy to imagine even the Knocked Up star doing a better job in the lead. Or Adam Sandler. Will Ferrell, maybe. Hell, I can't believe I'm saying this, but even Martin Lawrence's "talents," such as they are, would be better suited to this script — it needs a loudmouth, not a lounger.

Shame, too, because Drillbit Taylor is pretty good in almost every aspect. True, the plot is by-the-numbers, and as insubstantial as many of Wilson's lightweight line deliveries: Drillbit rents himself as a bodyguard to three bullied kids, as a way to get into their houses and steal expensive stuff. In order to "protect" them at school, he pretends to be a substitute teacher, but naturally develops a bit of a conscience along the way, in large part because he falls for a hot teacher (Leslie Mann) and the sex is just so good (as one might suspect, Wilson's more of a lover than a fighter). Were this just about the bullied high-school freshmen — overweight and foul-mouthed Ryan (Troy Gentile, the young Jack Black in both Tenacious D and Nacho Libre), scrawny stepchild Wade (Unfabulous' Nate Hartley), and überdorky Emmit (scary Ring kid David Dorfman, now pubescent) — it could have been a real charmer. Needless to say, Judd Apatow, master of freaks and geeks, is a producer (unsurprising, then, that Gentile and Hartley bear an uncanny resemblance to Michael Cera and Jonah Hill of Superbad). And, of course, that's Apatow's wife as Drillbit's love interest, a hot teacher with a fetish for losers (a recurring Apatow theme).

The array of cameos is impressive. David Koechner, Beth Littleford, Stephen Root, and Lisa Lampanelli, all of whom are probably appearing in something or other on Comedy Central right about now, show up as clueless adults, while UFC fighter Chuck Liddell and Serenity's Adam Baldwin play bodyguards angling for the low-paying gig Drillbit ultimately secures with the kids. And how refreshing it is that the geeky kid actually has an appropriate love interest for once. The bully here, however, doesn't even have a girlfriend, which may be why he's so angry all the time. Played by Alex Frost (last seen being bullied in The Lost), Filkins is like a junior version of Eminem — he even engages in a rap battle at one point.

It's the character bits along the edges of the movie that keep things lively, like the way Filkins successfully charms the teachers in one scene, then tries to literally kill the boys with a samurai sword in the next; or the way that the Asian kid on the promenade belts out Hendrix riffs so well that Drillbit is convinced he's the real deal; or particularly the supporting performance by Danny McBride as Don, Drillbit's skuzzy sidekick. One moment he's persuading his friend that theft is noble, rationalizing it with "Steal their TV — they'll read a book!" And the next, he's mocking Drillbit's teacher disguise by saying "You look like you teach Fagonometry!"

Let's be clear here: Owen Wilson can be awesome. Paired with brother Luke or Jackie Chan, he's the man. But left to fend for himself as a solo leading man, he's out of his league.

Jump to comments (0)
« Horton Hears a Who!, with help from Jim Carrey and CGI, sends Seuss’ message loud and clear   |   Caramel, Nadine Labaki’s film about fighting for forbidden love in Lebanon, became a film-festival favorite »