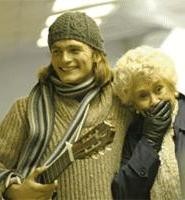 It seldom fails. Every year, just in time for the Oscar deadline, we get a movie that doesn't necessarily have a remarkable plot or director, but does feature an aging master (or mistress) thespian from the U.K., who one might assume is an automatic shoo-in for an award nomination, ensuring eternal recognition for the movie at hand. Often, these movies will be all but ignored and vanish without a trace -- does anyone remember Richard Harris' final film, My Kingdom? -- but invariably, the lead performance will be good and make the film worth watching, even if it's otherwise unremarkable. Such is the case with Joan Plowright and Mrs. Palfrey at the Claremont -- or would have been, as it just missed the deadline for 2005 Oscar consideration.

Based on a novel by Elizabeth Taylor (not that one), the story does contain a bon mot or two about the generation gap, but if it weren't for Plowright, things might fall apart quickly. She plays Sarah Palfrey, a widow who, while not necessarily enjoying her widowhood, is at least trying to take advantage of the freedom it entails. The Claremont hotel is something like an old folks' home, and she hates to think that she would ever be there permanently, but a month or two might suffice. Certainly she seems more lively than most of the other clientele, who appear to have settled into the slow pre-death rut that the apathetic elderly tend to find themselves in. For these residents, an argument over the changing of breakfast jam represents "exercising my rights -- keeps my heart going!" as one Althea Arbuthnot (Anna Massey) would have it. Aside from the fact that this is England, Grandpa Simpson would be right at home, watching Sex and the City in order to feel better about his imminent demise.

One day, defying a forecast of rain, Mrs. Palfrey takes a walk to the post office and trips on a tree root. Quick to her rescue comes Ludovic "Ludo" Meyer (Rupert Friend, in an auspicious debut year that also boasted Pride & Prejudice and The Libertine), a sensitive young writer who lives in a subterranean apartment nearby. Taking her in and semierotically rubbing disinfectant on her knee, Ludo bonds with Mrs. Palfrey and accepts her invitation to dinner in the Claremont's wretched dining room the following Sunday.

However, when Mrs. Palfrey tells her fellow residents that a guest is coming, they assume it will be her grandson, Desmond, who (unbeknownst to them) has not returned any of Grandma's phone calls. Mrs. Palfrey does not dissuade them, and Ludo, who aims to please, goes along with it, pretending to be Desmond to impress the neighbors. Since he looks like a poor man's Orlando Bloom, this isn't hard to do, but one has to wonder: Where is the customary WWII-generation outrage over his perfectly conditioned, girlishly long hair? These are more forgiving grandparents than the ones you may know.

You'd think this ruse might become the crux of conflict or the source of wacky high jinks, but it doesn't. The real Desmond does eventually make an appearance, but not to any great effect. Mrs. Palfrey's family and Ludo's family are relatively absent and inattentive; the story's message is to find family wherever you can. When Ludo takes Mrs. Palfrey to meet his real mother (Clare Higgins), she tearfully describes family life to the older woman, but instantly reverts to being snappy and short when Ludo returns to the room. Ludo rather insightfully says of his mother that "we live on different planets -- I sometimes visit hers, but she never visits mine." Such is motherhood; Mrs. Palfrey's daughter is equally incomprehensible to her (and us).

Plowright is thoroughly believable as a distinguished lady left behind by time, but Friend is less so as The Perfect Man. We're asked to believe that not only does he look like the ultimate hunk by contemporary standards, but also that he reads avidly, insists on writing his stories on a typewriter rather than a computer, and knows his classics so well that he can sing, verbatim, Mrs. Palfrey's favorite song. Also he's a well-placed house-sitter who sings for spare change in the subway, yet he manages to win the heart of one of the world's hottest women (Zoe Tapper) simply by virtue of the fact that both are trying to rent the same DVD at the same time, of a movie that happens to be Mrs. Palfrey's favorite (David Lean's Brief Encounter).

The rather predictable climax is a bit unfortunate, going where you expect it will, rather than where you hope it won't. It's all very well that Mrs. Palfrey has been godmother to a new budding romance, but really, it's hard to care about those young people when she's around.