Hair grows luxuriantly after a thin start at Cain Park. 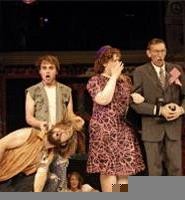 Back in 1968, George W. Bush, Dick Cheney, and other draft-age chicken hawks were learning the ineffable pleasures of ducking the battlefield, while other young folk went off to war. Now, in complete control of the government and with their very own quagmire to feed, our swaggering leaders are more or less free to pursue their overseas adventures without a hue and cry from young people. Such are the advantages of a volunteer military.

But that wasn't the case during the Summer of Love, when all young men had draft numbers and the hippie counterculture movement was gaining traction. Then, a startling rock opera called Hair opened on Broadway, raising eyebrows and blood pressure with its joyous celebration of sex, drugs, peace, and more sex.

This show, which in recent years has been viewed as a quaint artifact, is relevant once again, as flag-draped coffins return to our shores. Unfortunately, this production at Cain Park stumbles badly in the first act and has to work feverishly to generate the passion and purpose that are its birthright.

Many of the songs from Hair are familiar to anyone who allows the radio dial to linger momentarily on a soft-rock station, where "Aquarius," "Let the Sun Shine In," and "Good Morning Starshine" have taken up permanent residence in decades past. Because of this familiarity, it is incumbent upon any production to burrow through all the tie-dyed clichés and find the twin flames of love and rage that fueled kids in the late '60s.

Sadly, the Cain Park production has a couple things going against it. For one, the graffiti-choked set designed by Jeff Herrmann looks more like a bad parody of the era, rather than an attempt to revisit it with any earnestness. A few audience members are ensconced on ledges at the sides of the set, but the gimmick contributes little to capturing the vibe, even though their stunned smiles occasionally resemble a middling ganja buzz.

Also, director Victoria Bussert stages the bulk of the first act, comprising more than 20 songs, as if it were a concert version of the show. Singers step up and occupy a large circular platform, and all uninvolved cast members are arrayed around it -- like day campers sitting at the table, waiting for their juice and crackers. Try as they might -- and they do sway, nod, and pound their hands with verve from their cramped positions -- they don't add much to the proceedings.

The putative leader of this tribe is Berger, and Phil Carroll has just enough of a shaggy mane and stage presence to bring this hippie outlaw to life. But his counterpart, Claude, played by Mitch McCarrell, sports a Ted Henry razor cut that would have pegged him as a narc back in the day. As a result, many lines about flowing locks in the title song he shares with Berger come off as unintentionally funny. He wouldn't even need a trim to apply for a job at Squire, Sanders & Dempsey.

The large cast is admirably enthusiastic, even when limited by the staging. Kayce Cummings (as Sheila) has a fierce look and does a creditable job with "Easy to Be Hard," and Libby Servais handles the wry anthem "Air" with a clean, crisp vocal. As Hud, Jason Samuel shows off an impressive six-pack and registers intensity in "Colored Spade." But Benji Reid, thin as a flattened doobie, best captures the loose but weirdly focused craziness of the era. Regrettably, McCarrell doesn't have the chops to plumb the depths of the closing song of the act, so "Where Do I Go" and its questions "Why do I live?/Why do I die?/Tell me why?" feel banal instead of piercing.

Bussert and her tribe manage to achieve liftoff in act two, as Claude experiences a hallucinogenic high in a beautifully structured scene that uses flashlights to accomplish its effects. And finally, some of the more trenchant lines in the songs (written by Gerome Ragni and James Rado, and composed by Galt MacDermot) begin to hit home. This is particularly true with "How Dare They Try (to End This Beauty)," a song that could be sung in reference to any newscast, today or tomorrow.

The vacillating Claude is shipped off to 'Nam, where tragedy ensues, and everyone in the audience can feel the sickening rush of déjà vu descend on Cain Park's Alma Theatre. To have come this far from the horrors of Vietnam and realize we're back at square one in the Middle East can be inexpressibly depressing. Whether it is sung to comment on the current privacy-obsessed administration or simply about the glory of living in the light of day, "Let the Sun Shine In" has never felt more appropriate. Or more necessary.