Blackwell continues to shill for the devil.

By First Punch [email protected]
click to flip through (2) 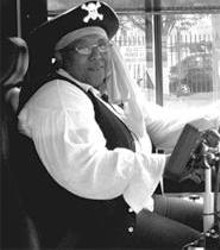 Last week, Blackwell asked the state controlling board to pony up an additional $1 million to buy more Diebold voting machines in time for the November election -- in which he just happens to be running for governor.

The move was especially brazen considering that Blackwell recently cashed out $10,000 worth of Diebold stock that was planted in his portfolio. To which his spokesman said, in essence: "Oops, our bad."

Controlling board member Senator Ray Miller (D-Columbus) voted against dishing out the bribe -- ahem! state contracts -- but failed to gain the majority vote needed to stop the deal from going through.

"As far as I'm concerned, Diebold should be disqualified from doing any business with the state of Ohio," Miller says.

As long as Uncle Tom's in charge, Diebold will do whatever the hell it wants.

A "very high incidence of theft of yard furnishings" topped the safety alerts for the Ohio City Near West Development Corporation last week, according to an e-mailed warning. The "hardest-hit area" was between West 44th and West 50th, from Franklin to Bridge avenues.

"Chairs and tables are the primary items stolen," continues the urgent bulletin, "but there are reports that include the theft of a hammock, a lawn mower, and even a statue of an angel."

Stealing an angel? That's gonna be hard to explain to St. Peter.

Bob Shores, Ohio City safety coordinator and the author of the e-mail, says this kind of theft has plagued the neighborhood since he moved in 25 years ago. After years of losing yard furnishings, he now bolts down anything left outside. He recommends neighbors do the same.

Yet one more reason to Believe in Cleveland.

His girl Connie
Pulitzer Prize-winning columnist Connie Schultz may be on leave from The Plain Dealer, but that doesn't mean she's out of the spotlight.

It comes in response to her very first post, in which she writes, "Many Ohioans have nervously pulled us aside or stood bravely in a crowded room to ask if we're scared of what 'they' can do to us."

To which one sympathetic reader replied: "Jesus. Such melodrama! It sounds like you think they're rounding people up in the dead of night and tossing 'em in gulags."

Shhhh! Don't you know that "they" read the internet?

· Secret, Bat Cave-like tunnel (of a size no less than would accommodate a Hummer) from Daddy's mansion to Please, We Have Nothing Else's practice facility.

· A special assistant designated to bite Daddy's nails during timeouts.

· A professional videogame player to travel as Daddy's official Madden opponent. Stipulation: Assistant must always lose to Daddy in final seconds of game.

· The opportunity for any of Daddy's entourage (the party hereafter collectively known as "Hangers On") to play the role of mascot Moondog if they feel like it, which they probably won't.