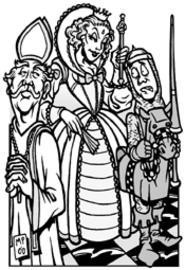 Mark Poutenis
Certainly the philosophers in Case Western Reserve's humanities department could soliloquize all day on how chess recalls the human drama around us, but that's not really the point of the live figures chess game that will kick off the university's Humanities Week on Monday.

"No, I don't think it's symbolic of humanities in any particular way," says Dr. Thomas Bishop, director of the Baker-Nord Center for Humanities and organizer of the now annual faculty-versus-students chess game. "I mean, mathematicians and scientists use the kinds of planning, strategizing, and mathematical calculations skills that would be used in the game, so I don't think there's anything specific to humanities."

In fact, returning to combat for the faculty will be Pieter De Haseth, a professor of biochemistry who, over the last two years, has won one match and lost the other. But both matches were played against the same student, who has since graduated, so this year will be a fresh start against a new student -- any accounting for previous weaknesses will have to be retooled.

"Weaknesses?" Bishop wonders. "We haven't been fortunate enough to find any weaknesses. They didn't have any weaknesses at all last year."

The game itself -- played out by elaborately costumed pieces on a "board" set up in the Kelvin Smith Library Oval -- is not truly a team effort, but is played head-to-head between the two representative opponents. Previous years, the match was played in advance and restaged for live action. This year Bishop thinks they might try playing the game on the day.

"It makes some difference," he says. "Obviously if it's played at the event, we would have to time it. In the past, we have played the game in advance and simply replayed it, which is interesting, except that the level of suspense, at least in the actual people playing the game, is not very high."

Indeed, with the outcome already decided, it wouldn't do much good for, say, a dissatisfied pawn to complain about its player's choice of move. "We've never had anyone resist," Bishop agrees. "We've had quite a few people uncomfortable with the fact that they're about to be killed, but we've never had anyone refuse to make a move."

And who knows what psychological blocks could arise as the players witness their friends and colleagues losing mini-battles midgame? "We usually have a figure dressed as Death carry them off when they've been dispatched," Bishop says calmly. "There's a certain amount of anxiety as the pieces fall. We think it's more fun to have actual human combatants."

Still, the faculty members could prey on one weakness: They could always threaten the students with their grades if they don't throw the game. "No, we would never do that," Bishop laughs. "How awful that would be."

Then again, all's fair in love and war.