People of the Year

The bold and the beautiful get their due. 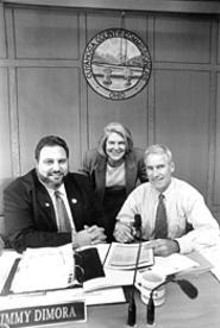 The Royal Tenenbaums
There's a great scene in Steve Martin's 1987 film Roxanne, in which Martin's character puts a coin into a newspaper box, screams when he sees the headlines, and pays to put the paper back.

It's true that bad news takes precedence, eclipsing the numerous honorable deeds occurring every day. Still, despite all appearances, the bulk of humanity toils on the side of good.

So, before 2001 fades into the distance, it's worth pondering some of Northeast Ohioans' finer moments of the past year. They include everyday good works and bona fide heroics.

Take Carol Patch, who sacrificed her life to save a little girl she had just met at a beach party in Euclid. The two were in the lake when a boat came barreling toward them. Patch pushed 10-year-old Samantha Trommetter out of the way, then was struck by the boat. She died from her injuries.

Then there's Cleveland school bus driver Sharron Young, who jumped onto a loaded bus to stop it after the driver collapsed from a heart attack. Ten-year-old Latashae Inman demonstrated quick thinking of her own last spring, getting her five-year-old brother safely out of their Akron home when it caught fire. And Riverside Elementary School Principal Philip Pempin had only seconds to respond when he saw six-year-old Cody Boytek go rigid in the school lunchroom last March. Pempin used the Heimlich maneuver to save the boy from choking on a raw carrot.

Good neighbor Roderick Green climbed a ladder to a third-story apartment window to coax a frightened Leia Burgess down to safety after her apartment house on Lorain Avenue caught fire. And Irvin Reed responded to anguished screams near his home on East 138th Street. When Reed found a man pinned under a collapsed second-floor porch roof, he lifted the roof up and held it so the man could free himself.

Not every good deed involves drama. Sometimes, people just carry on day after day, doing their work the best they can. While the city careens from one financial embarrassment to another, Cuyahoga County Commissioners Jane Campbell, Tim McCormack, and Jimmy Dimora move forward with quiet efficiency. Luckily for Cleveland, Mayor-Elect Campbell might soon infuse some of the county's fiscal prudence into the city's sloppy bookkeeping.

In the arena of health education, rapper Jahi has proved remarkably effective at teaching kids about HIV and AIDS. A hip-hop artist with connections to Chuck D, Jahi is also a certified educator for the AIDS Taskforce of Greater Cleveland. The combination gives him immediate credibility with young people, who tune into his message when they might otherwise tune others out.

And, finally, Rabbi Chaim Feld has turned his one-man campaign against gossip into a nationwide movement. He co-founded Words Can Heal, a non-denominational group that spreads a simple but potent message: that words should be used to heal rather than hurt.

Among the many worthy contenders for People of the Year, two very different newsmakers stood out.

Tony Longcoy was working as a security guard at the Charter One branch on Broadway last summer when a nervous-looking stranger showed up. The man ran to the teller windows, shouting that he had a gun.

Longcoy made a split-second decision to grab the robber and pull him into the hallway, where it was "just me and him." It turned out that the bank robber wasn't armed, but Longcoy had no way of knowing that at the time. He cuffed the man, and it was over.

While he says that branch employees were happy with him, Charter One honchos were not. "They said I violated their policy" by nabbing the perp, and they sent Longcoy packing.

The turn of events displeased some customers -- "I was there for two years, and I knew everybody on a first-name basis." A few pulled their accounts in protest, he says.

Charter One spokesman Steve Phillips says the bank didn't fire Longcoy; it fired the company that employed him. "We appreciate the intentions of the security officer," he says. But "his actions violated procedure and put employees at risk -- and himself at risk." The bank canceled its contract with Central Enforcement Unit, Longcoy's employer, effectively squeezing him out of a job.

Things haven't been easy for Longcoy these past several months. Steady, decent-paying work has been hard to come by, and his credit cards are maxed. "I'm in more debt now than I was before."

Still, he's not sorry he took action on that June day. "I feel I did the right thing. Unfortunately, it put me in a bad situation."

In October, the Council of the Great City Schools named her its top urban school leader. "It's kind of like the Oscar of your profession," she marvels.

A different -- but equally rewarding -- experience happened the other day at her local CVS. Three little girls were watching her, hiding behind counters, whispering, and giggling. One of them finally asked, "Are you Miss Barbara Byrd-Bennett?" When she answered yes, the girls asked, "Can we hug you?"

Byrd-Bennett calls it "the greatest reward" when children recognize her. It happens often. "Then they want to tell you about their school. It's phenomenal."

Cleveland has embraced her whole-heartedly as the savior of its public schools. Since she arrived from New York City in 1998, the district has shown an increase in student performance, succeeded in passing the bond issue, and improved its financial rating. "Of most importance was the fact that she has taken a district that was in profound trouble and has given it hope, which is no small task," says Michael Casserly, executive director of the Council of the Great City Schools. "A number of other cities had pretty dramatic progress in the last year, but the progress in Cleveland really stood out."

Byrd-Bennett realizes there's still much to do. But she says it's no longer accurate to describe her district as beleaguered. Three years ago, it was "deeply wounded and deeply in trouble," she says. "To continue with the medical metaphor, we have stopped the bleeding, and the patient is in recovery."