The Islamic revolution — and puberty — through the 2-D eyes of Marjane Satrapi. 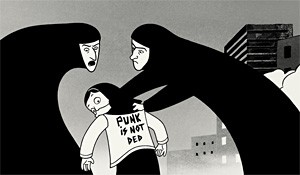 Persepolis is a small landmark in feature animation. Not because of technical innovation — although its drawings do have a handcrafted charm forgotten in the era of the CGI-'toon juggernauts — but because it translates a sensitive, introspective, true-to-life "adult" comic story into moving pictures.

We first meet little Marjane (voiced by Gabrielle Lopes) in 1978. A rambunctious Bruce Lee acolyte, she's the mouthy only child of a progressive Tehran family anxiously watching their shah's repressive government give way to the ayatollah's far worse fundamentalist revolution. The nation carries its bad-to-badder momentum through the mid-'80s, and to protect their daughter from the escalating war with Iraq, Marjane's parents send the now-adolescent girl (at this point voiced by Chiara Mastroianni) into exile at a Viennese school. Until then, Marjane's story overlaps with her country's (her bedroom, where she violently headbangs to Iron Maiden, morphs into the border's battlefields). But displaced from her homeland, teenage Marjane's focus turns inward: She's victimized by boys and by her alien pubescent body, and she starts sampling subcultures, trying to reestablish her sense of self. The film's latter chapters bring her home for the university years, when the strictures of Islamic law have pulled even tighter.

Though the Persepolis comics carried the up-market "graphic novel" tag, there's nothing obscure or difficult about the film they became. The characters are downright cute, rendered in a clean, comfortingly rounded line. The comic relief tends toward doofy, broad crowd-pleasers.

Our heroine's early girlhood is marked by an imperiled sense of enchantment. Dancing marionettes illustrate to Marjane how British interlopers propped up the shah; a recounted escape from government persecution takes on the quality of a fable.

The guts of the thing are in its embroidery of everyday details: the thrill of scoring contraband Western pop off the streets, the routine absurdity of a university "life drawing" class, the smuggling of illegal homemade wine into house parties. The film's accessibility has made Persepolis college curriculum and its maker, Marjane Satrapi, something of a spokeswoman. She's even earned a tribute of sorts from back home. Her movie's Jury Prize-winning stand at Cannes got a response from an Iranian government-affiliated cultural foundation, which accused the film of presenting "an unrealistic face of the achievements and results of the glorious Islamic Revolution."