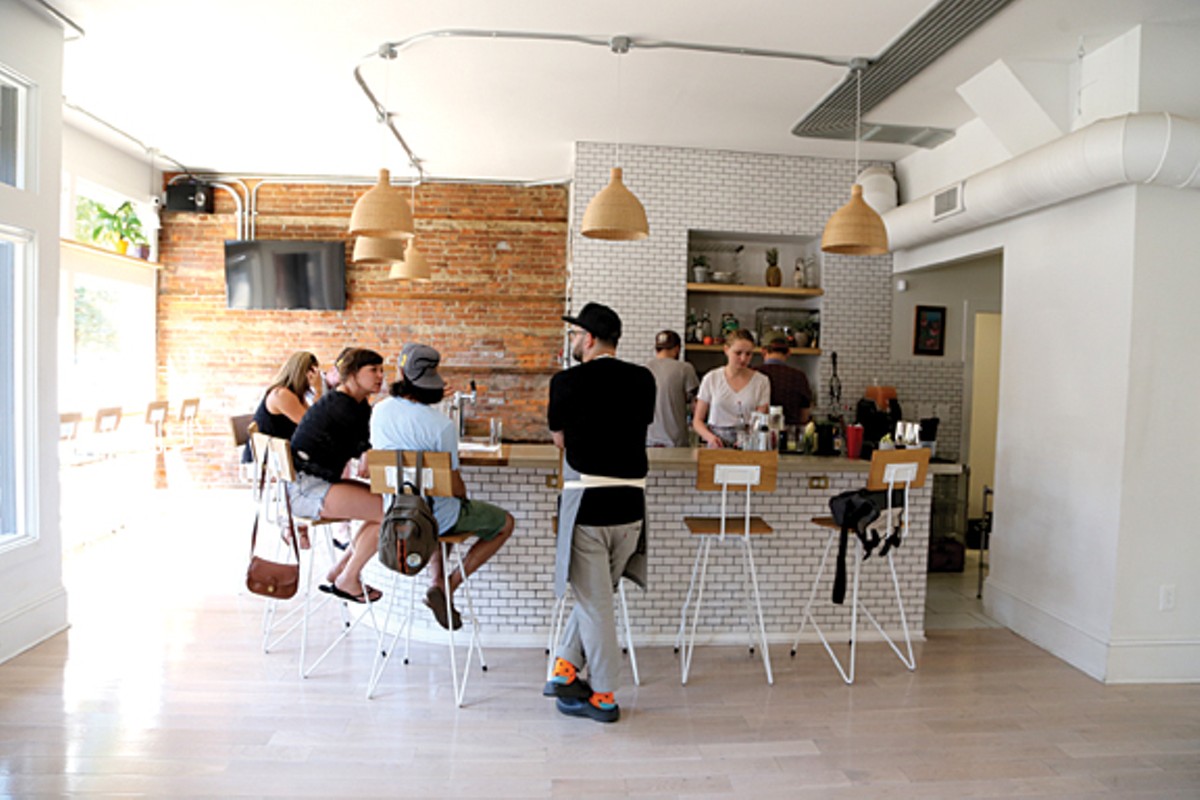 Every time I've eaten chicken feet, the setting has been the same: some cacophonous Chinese restaurant with sticky seats, outdated carpet and dim sum carts rattling around a cavernous dining room. Dining at Plum is the polar opposite. Plucked from the pages of an interior design magazine, the venue is peaceful, elegant and stunning. It is precisely the type of setting in which one would not expect to be sucking skin and flesh from the feet of fowl.

Photo by Emanuel Wallace
“Chickenrones” in a teacup with wing sauce on the side.

That sort of culinary dissonance can throw a diner for a loop. When folks talk about the Plum — and people love talking about the Plum — they invariably describe the restaurant in terms of its look and feel, which set a new standard for "the Cleveland aesthetic." What they talk about less is the food, not because it isn't good, but likely because it doesn't fall neatly into any familiar category.

The Plum gets people talking.

It's not just the decor; the menu format gets people talking as well. A full two-thirds of the dinner roster consists of small plates built for sharing. Even the so-called entrees seem to fit better in the middle of the table than the perimeter. And with almost every item priced between $2 and $15, a group of four can sample every dish for about $30 per person. This communal approach invariably leads to friendly pre-dinner deliberations, intra-meal assessments and post-meal judgements.

It was about halfway through one of our meals when it dawned on us that a third of our dishes were vegan or vegetarian. Chef-partner Brett Sawyer worked at both Greenhouse Tavern and Trentina, restaurants where produce is given as much consideration as protein. His creamed spelt dish ($9) is as satisfying as a mid-winter stew, despite the fact that its main ingredients are ancient grains. Earthy wheat berries languish in a warm and creamy broth punctuated by shaved asparagus and bright green peas that pop in your mouth. Hints of lemon and pine add intrigue. A radish and watermelon salad ($8) is a study in green and red, with the sweet, crisp fruit and veggies affixed to the plate by a slather of vegan butter.

One minute you're biting into Southern-style dishes like fried catfish nuggets ($6) and crispy cornmeal croquettes ($8) paired with smoky shrimp paste — the chef's play on shrimp and grits — and the next you're loading up wafer-thin puri, crispy Indian flatbread, with rice, chutney and tangy yogurt sauce. That cauliflower chutney is a cross between a curry-style aloo gobi and Latin-style picadillo. It's the kind of post-cultural cooking we used to call fusion but now simply sit back and enjoy. Despite the unorthodox pedigree, the sensation of eating it is utterly familiar. "It's like Indian nachos," one diner said.

The Plum doesn't take itself too seriously.

There's no doubt that plenty of navel-gazing and prep work go into crafting these dishes, but that doesn't mean the food isn't fun. When the server sets down an order of the "chickenrones" ($4), the table gets a kick out of the incongruity of serving what is the chicken skin equivalent of pork rinds in a dainty china teacup. The addictive poofs are paired with a Buffalo wing-style hot sauce. Dark and crunchy catfish nuggets are arranged on a silver platter around a dipping sauce that is a knock off of Swenson's Galley Boy sauce. Cocktails, a highlight of meals here, are all named after retired pro basketball players.

Chicken feet ($5), it's safe to assume, are not for every diner. When staring down a stack of prehistoric-looking talons, all but the most adventuresome diner is bound to be squeamish. But pick one up and nibble away on the crispy, spicy flesh and you'll be hooked. Then again, most people never get past the "pick one up" part. If a dinner menu only has three large plates, it's a gutsy move to make one of them a whole fried fish ($15) that forces diners to work around bones. It's all part of the Plum's plan to avoid predictable proteins in favor of unlikely choices like beef belly, pork shanks and cheeks.

When I think of banh mi sandwiches, thoughts of vibrant flavors and textures immediately come to mind. The Plum's vegan version ($9), served at lunch, lacks character. The soft, meat-free filling made from jackfruit; dearth of bright, pickled veggies; and sad, squishy "baguette" failed to make an impression. In a lovely looking green bean and roasted grape salad ($7), the beans are so al dente they're a chore to eat.

The Plum eased into life at a snail's pace. A two year build-out process allowed the crew to test recipes at weekly pop-ups next door at Platform. First came lunch, then came dinner. I'm sure the restaurant will continue to evolve, and as it does, it will be doing so in a timeless setting.