Send a News Tip
Because of Winn-Dixie 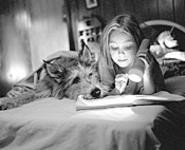 Opal and her dog eventually win friends and influence people.
It's hard to know what to expect from Wayne Wang. The Hong Kong-raised director has made one gorgeous mood movie (Chinese Box) and two intelligent literary adaptations (Smoke and Anywhere but Here); he was also responsible, in his early days, for the overwrought sobfest Joy Luck Club. Then, in 2002, he brought us Maid in Manhattan, a featherweight confection that could have been spun into existence by any Hollywood hack. So whither Wang?

"A soulful children's movie" probably wouldn't have been anyone's first guess. But that's what Because of Winn-Dixie, a southern Gothic based on the best-selling children's novel, intends to be -- and, for the most part, it is. Wayne paints a slow and steady picture of a lonely girl in a sleepy Florida town, befriended by a dog and, through that dog, by several of the town's unique characters. Just as Winn-Dixie the canine draws out the people he meets, Winn-Dixie the film evokes more than a couple of remarkable performances, including a moving turn by Jeff Daniels.

Ten-year-old Opal (AnnaSophia Robb), the daughter of a preacher (Daniels), leads a lonely life in a town called Naomi. Uprooted from her latest home, where she had friends on the softball team, she passes her early summer days playing pretend ball and riding her bike through the barren streets. Her mother has long since departed, and her father has barred the doors against discussion of that. The kids in town don't show any interest, except to tease, so Opal is on her own -- until Winn-Dixie comes galumphing in.

Winn-Dixie is a dog, a large and shaggy mutt-looking thing, nameless and homeless when he all but destroys the produce section at the town's supermarket. To save the dog from the pound, Opal claims he's hers, christening him with the store's name on the spot. Then she takes him back to the trailer park, where she and her father have thus far passed quiet, strained nights. At first, the preacher won't have any of Winn-Dixie, but then he strikes a deal: Opal can keep him until she finds him another home.

One of the strong elements to this story is that no adult is a villain. As the summer progresses, Winn-Dixie earns his place in the preacher's heart, and in a lot of other hearts as well. He shows Opal how to make friends and how to draw out the joy and kindness in the formerly sullen, such as quirky pet-store employee Otis (singer Dave Matthews, in a fine performance). Some of the characters skirt stereotype, but the film finds something original in each.

There is one final problem, and that is the ending. After a solid and patient story, which takes its time to accrue weight, the end rushes into a dramatic climax and hasty resolution. The misstep sends the film into chaos, altering its pacing and changing its tone. Worse, the final note is unequivocally joyous, when a more dramatic, bittersweet option was there for the taking. That's a mistake, though one that moviegoers have come to expect. What production aimed at children and produced by Hollywood ever has the bravery to show something more honest than pat?