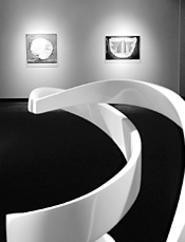 Enameled steel sculpture by Fred Schmidt, one of three on display at the Sculpture Center.
The past always has a way of shaping the present. The industries that developed along Lake Erie recruited artisans who could put their skills to practical use: fabricating steel, making paper, working with enamels. It made sense, then, that when some of these workers and their descendants turned to the finer arts, they used familiar materials.

Tribute, at the Cleveland Sculpture Center, celebrates four artists who flourished in this blue-collar region. Perhaps the only thing that Wayne Draznin, Nicholas Livaich, John Puskas, and Fred Schmidt had in common -- besides the fact that all four died within the past two years -- was their ability to craft a unique artistic signature from ordinary elements.

Sculptor Schmidt took steel and turned it into curves of light and shadow for three of the striking works shown. A self-taught artisan, he learned to weld while working for the New York Central Railroad 40 years ago. These large, curved, abstract enameled shapes (most often white) look as plump and sensuous as flesh. Schmidt goes against the practice of Richard Serra and other influential modern sculptors, whose steel pieces appear ready to implode under their own mass. For Serra, the point is to show steel's strength and the viewer's vulnerability. Schmidt rejects this, turning metal buoyant with reflected light that lifts the eye, allowing these works to transcend their earthbound weight.

His wife, Jane Glaubinger, calls them his "pretty pieces," and they are indeed quite beautiful. Schmidt also fabricated sculptures (two are displayed) from common implements, hammers, and farm tools welded together and placed on pedestals, thus lifting them into whimsy. Other works by Schmidt show up in public spaces all over town: at the Cleveland Heights Municipal Building, the Cleveland Clinic, University Hospitals, and on lawns of area elites. Unlike Willard Park's "Free Stamp," by Claes Oldenburg and Coosje van Bruggen, Schmidt's sculptures blend into their surroundings, an extension of nature's curves and lines. Schmidt once wrote that he sought to show images "continually rising from beneath the surface of conscious awareness." He succeeded.

Light and materials worked in a different way for the idiosyncratic genius of Wayne Draznin, who put in time on a Ford assembly line before finding his vocation as an artist who liked to tinker with gadgets and film. His self-deprecating humor comes out most clearly in the video player he installed in a very early model of an X-ray machine -- a machine like those used to check fit in shoe stores, before radiation was understood to be dangerous. When he was dying, Draznin turned the camera on himself to make the video "Mark as Another." It slowly pans up his body, sparing neither scars nor genitals. A final scene shows an eye moving closer and closer to the camera lens, until the watcher feels watched. It is creepy -- and chillingly effective -- art that creates an uncomfortable intimacy. It's as if he's saying, "If you think this death applies only to me, the joke is on you." Here was a creative person capable of great intensity and resilience; surely he must have been, to film his own death.

The two other artists honored produced less challenging but still charming works. Six small enamel pictures on copper, silver, and other metals show John Puskas to have been a skilled artist with an eye for color and form. After graduating from the Cleveland Institute of Art in 1952, he settled down in a local version of the Left Bank, in a former Millionaires' Row carriage house on Euclid Avenue, and made a living teaching at area colleges. "In Shirley's Studio" shows the mess and detail of an artist's workplace, even down to the tiny paintbrush. Another enamel features a semi-abstract blue sailboat flashing over a jewel-toned scene. Puskas's work may be seen on a larger scale in a mural he created with Deanna Robb in Porthouse Theatre at Blossom.

In 1958, Nicholas Livaich began working at American Greetings, churning out art to meet other people's expectations. But he also expressed his own artistic vision (especially after his retirement), experimenting with form and materials -- including paper, which he made himself. Livaich's abstract pictures combine thick, molded paper pulp pressed into shapes to create rectangular canvases touched with color. A bold Aztec pattern of triangles, shaded with reds and rose in horizontal bands, suggests the beauty of the New Mexico land to which he retired. Livaich also worked as a printmaker, and his "Pecos October" (oil on canvas) reflects his delight in shade and pattern produced in nature.

For the most part, what these artists have done is embrace the genius loci, the material spirit of the working world that is the inheritance of Cleveland. This show pays tribute, rightly, to four talented and intriguing artists who turned the stuff that runs industry into the stuff of art.