Margot has the guts to see family for what it is: Prickly. 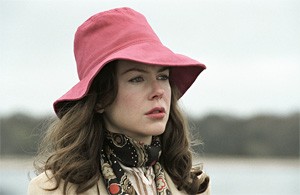 There are comedies of discomfort, and then there's Margot at the Wedding, Noah Baumbach's scalding follow-up to The Squid and the Whale. An immersion in sibling malice and simmering resentment, with one of the most infuriating characters in recent movies holding us under, Margot tramples the commandment that only the pure of heart are worth a viewer's scrutiny.

Margot is played by Nicole Kidman, all sculpted cheekbones and blithe venom. Introduced en route by train to her sister's wedding, Margot initially doesn't seem so bad — although it's an ill omen that her gangly adolescent son Claude (Zane Pais) mistakes her for some random sourpuss. But within moments, Mom outs herself as the kind of woman who can accuse other parents of denying their child's autism or gaze sadly at her son and sigh, "You used to be more graceful."

Their destination is Long Island, where the happy event is to take place. The introduction of sister Pauline (Jennifer Jason Leigh) establishes the movie's racing pulse: She's shown standing still as Margot arrives and — with a furious cut — is shoved into a reunion she clearly dreads. While Pauline's fiancé, Malcolm (Jack Black), punches up the vows with a little levity — "Not jokey," he explains, "more character-based humor" — the sisters settle in for a weekend of rapidly deepening anxiety.

As in The Squid and the Whale, Baumbach's chosen milieu is the company of educated, intelligent, empathetically blinkered New Yorkers who know how to use words for everything except concern. He writes dialogue that genuinely lacerates. "When you were a baby, I wouldn't let anyone else hold you," Margot coos to Claude, setting him up for the kill: "I think maybe that was a mistake."

It gets worse as Margot sloughs off her husband (an atypically studly John Turturro), blabbers a secret sure to upend Pauline's household, and voices at every opportunity how certain she is that Pauline is marrying beneath her. So why should we give a damn about a character this toxic? A solemn truth about family is that it's almost impossible to hate people we know this well. Margot, in Kidman's compellingly unlikable performance, is every relative whose motives and utterances we've picked apart on the drive home from some misbegotten holiday.

When The Squid and the Whale came out, Baumbach was branded a whiny narcissist by some critics — a sneak thief ransacking his own broken home for self-serving material. But in truth, Baumbach draws his characters with a wealth of novelistic detail, creating a denser, gamier, and more complex sense of family life than American movies typically dare.