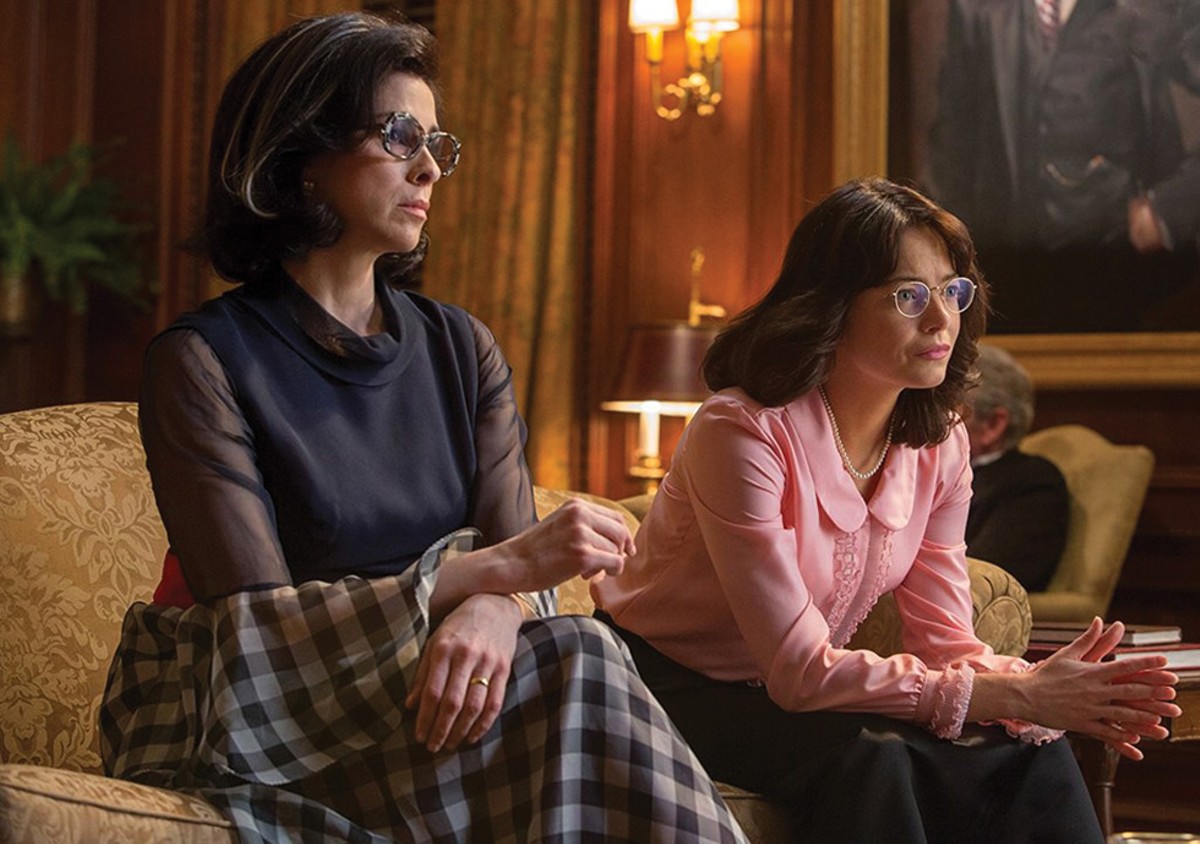 Battle of the Sexes dramatizes the 1973 exhibition match between 55-year-old former U.S. Open Champion Bobby Riggs (Steve Carell) and the 29-year-old star of women's tennis, Billie Jean King (Emma Stone). The movie is a whirlwind recreation of the colors and textures of the 1970s and, in the end, is much less a "sports pic" than it is a forceful biopic that captures one of the more pivotal, popular moments in the crusade for gender equality in athletics.

The film, which opens Friday in theaters area wide, jams a ton of information and characters into two hours, but this bounty does little to detract from the central message. Stone, in her striking portrayal of King, is even better than she was in last year's La La Land, for which she took home an Academy Award.

In 1972, King is at the top of women's tennis. But to protest the vast discrepancy between the tournament winnings of male and female players, King sets out to form a new women's tour, eventually sponsored by Virginia Slims cigarettes. At her side is Gladys Heldman (Sarah Silverman), who brooks no nonsense from the good old boys in charge. When Heldman and King burst into the gentlemen's wing of a fancy club to confront former tennis star and current promoter Jack Kramer (Bill Pullman), Heldman is told she's not allowed to be there.

As the Virginia Slims Tour builds momentum, we watch a bored and sullen Bobby Riggs as his life reels from anticlimax. He is a degenerate gambler and a buffoon, which has strained his marriage to the wealthy socialite Priscilla (Elizabeth Shue). It's Riggs who proposes the Battle of the Sexes, one drunken night, though King vehemently declines at first. King knows that for Riggs, the match is all sparkle and spectacle. A man playing a woman, for him, is nothing more than a gambling handicap, about as serious as a man playing with a frying pan instead of a racket or wearing flippers instead of shoes. But when Riggs embarrasses Margaret Court (after Court unseats King as the World No. 1), King knows that much more is at stake. She accepts Riggs' challenge.

Carell is, somewhat unexpectedly, almost too sympathetic as Bobby Riggs. There are ghosts of The Office's Michael Scott in almost every facial expression and impolitic remark. Though Riggs self-identifies as a "male chauvinist pig" — much to the delight of male supremacists everywhere — he is a showman and a goof, and you can't help feeling sorry for him as he earnestly asks his wife and his son to be there for him at the match, and both decline. The real villains are the old boys like Jack Kramer, who in his first appearance argues for the genetic and physical superiority of men. "They're just more fun to watch," he insists. King's confrontation with Kramer, in an ancillary conflict about the match's commentators (and what may be Stone's best scene), is even more of a victory than King's ultimate triumph against Riggs.

One of the many strengths of the film is portraying the small, everyday ways women are unfairly treated. Howard Cosell, the lead ABC commentator for the match, appears in the film from archived footage and is spliced, via masterful CGI, with actress Natalie Rosales, portraying tennis star Rosemary Casals. During the match, Cosell has his arm around Casals, and as she offers insightful commentary, it's as if Cosell is giving a child a turn to say a few words.