Revenge of the Nerd

Karen O used to be a shy girl. Now she's one of rock's ballsiest provocateurs. 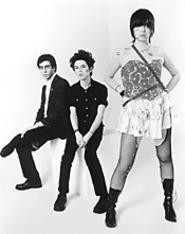 The Yeah Yeah Yeahs didn't even have a CD released when the hype started more than a year ago. They were just an amazing live band from New York, basking in all the retro-rock hype of late. Pundits exclaimed that they blew the White Stripes off the stage. Even Rolling Stone was chapping its lips on their asses.

But these brown-nosers had a point. With only a guitarist, drummer, and lead singer, the Yeah Yeah Yeahs were annihilating every audience they played for. Embodied in vocalist Karen O -- the bastard child of Nina Hagen and Iggy Pop -- the band's dirty garage punk reeked of authenticity, with scathing lyrics, tight musicianship, and an excess-driven stage presence that makes the Strokes come off like the Backstreet Boys. By the time the band's self-titled EP was released by Touch and Go in July, the Yeah Yeah Yeahs were talked about as though they were already legendary.

I'll be the first to admit I've never seen the Yeah Yeah Yeahs perform, except on video, or witnessed the sex appeal of Karen O as she dances around the stage like a dervish. What I do know is this: Karen O used to be a nerd. I know this because we were once in film school together at NYU. The media plays her off as this crazy sex goddess, but the Karen O of yesteryear was timid and awkward, with a profile lower than a limbo stick at Verne Troyer's beach party. Naturally, this invites the obvious question: How the hell did she pull off this transformation?

When the Yeah Yeah Yeahs kicked things off almost three years ago, New York City had a rock and roll scene, but for the most part it was bland and unfocused, full of too many Black Flag cover bands and hordes of swarthy, legitimately ugly people. These days, thanks to the Strokes, the electroclash trend, and Diesel's line of "dirty" jeans, looking ugly is now cool, and so N.Y.C.'s rock clubs have become Valhalla for the city's fashionable elite. When Zinner, O, and Chase got caught up in it, though, it was quite a different story. "[The old scene] kind of spurred the whole inspiration to try and fuck things up -- you know, our way to try and rock the boat," Karen O says via telephone from Brooklyn, amid a flurry of jitter-driven "ums," "likes," and "ya knows."

"We decided to do something really dirty, thinking, 'Fuck Rock.'"

Wait a second. Did she just say Fuck Rock? Is this the same shy girl of the past?

"It's usually the people who are the most soft-spoken that can, you know, kick ass onstage," she points out.

Indeed, through five songs that clock in at less than 14 minutes total, Karen O has transformed herself from an introvert to a caustic hellion on her band's debut. She's the sexiest siren you've ever heard in one moment, the last person you'd ever wanna screw with in the next. "Bang" finds O begging the world to fuck her -- "Bang, bang, baby, the bigger the better" -- while on the garage-punk/death-metal thrasher "Art Star," she dismantles the snotball conceptual-art community. Then there's "Mystery Girl," which thumps and wiggles amid Zinner's crunchy guitar riffs, as O tells us about a strange femme fatale who appears to bear quite a close resemblance to the singer herself: "Mystery girl/Keep on faking your mystery world/'Cause the mystery boys will be your toys."

"When I get up onstage, I really do just kind of switch," she says. "I don't walk around in the same outfits that I wear onstage. It has a lot to do with taking on a persona, but it's not forced. It's organic in that sense."

I'm starting to figure this out. Karen O is a dork in rock star's clothing. It all adds up: the stuttering, the Valley Girl-speak, the fact that so many music writers (also dorks) love her.

Finally, there's "Our Time," a prescient anthem the Yeah Yeah Yeahs must have written with a crystal ball. "It's our time, sweet babe/To break on through/ It's the year to be hated/So glad that we made it," she sings, anticipating the feelings of someone like myself, someone who knows exactly what's going on here -- that the dorks are taking over. But the more you think about it, the more you realize how cool that is. Iggy was a dork, Siouxsie was a dork; hell, the Ramones were definitely dorks. No one wants their rock made by peeps that were cool before they played it; that would suck (see Limp Bizkit or Oasis). What Karen O and her Yeah Yeah Yeahs have taught is that the best thing about rock and roll is that it can transform total dorks into total gods. Hope you were taking notes.