As The Scorpion King, the People's Champ doth layeth the smacketh down. 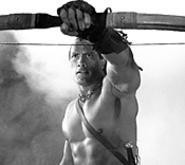 The Rock is cookin' -- except with the ladies.
Say this about World Wrestling Federation Entertainment head honcho Vince McMahon: He knows what his fans want. Few movies have ever been as specifically tailored to an existing audience as The Scorpion King, in which McMahon's prize champion, The Rock, portrays The Rock wearing a loincloth and going by the name of Mathayus. McMahon executive-produced, and it shows. Essentially, the movie is an episode of Smackdown set in ancient times. Substitute Michael Clarke Duncan for Hollywood Hulk Hogan as the fallen hero redeemed by teaming with The Rock, newcomer Steven Brand for McMahon as the power-mad king, and former teen-model Kelly Hu for Trish Stratus as the king's supervixen with a secret heart of gold, and you've got it.

Those who never watch Smackdown are no doubt already snorting with derision. Fine. This movie isn't necessarily made for you (although a similar movie two years ago, starring a foul-mouthed brawler who swung a sword, won the Oscar, so you never know). This is for devotees of the larger-than-life drama McMahon and The Rock provide every week. It's a flick filled with as much fighting, cleavage, and near-nudity as a PG-13 allows, and it even has a pyro effect or two.

So what if the film bears as much resemblance to history as the WWF does to the Olympics? The guys in charge know that -- and what's more, they know you know that, so they're free to be gleefully unapologetic about the movie's intentions. The Scorpion King opens with an extreme close-up of a deformed brute -- who promptly gets clocked in the head with a throwing star -- and then climaxes in a gloriously preposterous act of self-mutilation. It's a movie that rewrites the invention of gunpowder and the catapult (intended, we are told, as "a quick means of transportation" that has just one small problem "with the landing"), and practically rubs our face, Vegas-stripper style, in surgically enhanced boobs (McMahon's influence, no doubt). As the star himself is prone to say, just bring it.

The gist of the story is that a scoundrel by the name of Memnon (Brand), who has a sinister English accent and the worst mullet ever shaved by redneck barbers, has taken control of the city of Gomorrah with the aid of a powerful sorcerer. (The more famous neighboring city of Sodom is mentioned but not glimpsed; that movie would presumably star ambiguously gay WWF tag-team champions Billy and Chuck.) Distraught that a limey redneck is doing them in, the last surviving chieftains band together to hire a team of assassins to take out the sorcerer, thus negating Memnon's advantage. But a double-cross ensues, the sorcerer turns out to be a hot chick (Hu) capable of distracting macho would-be murderers, and the assassins are all killed save Mathayus, who's buried up to his neck in sand to be eaten by large, computer-generated fire ants (watch for the scene where he crushes one with his immense chin!). Fortunately, a cowardly comic-relief character is conveniently around to unearth him.

So how does all this relate to last summer's The Mummy Returns, which introduced the main character? Not much at all. There's little blatant CGI, except for the fire ants and a few cityscapes, and only the slightest hint that Mathayus will one day become a giant, unconvincing-looking bug. The Rock seems to have taken some acting lessons in the meantime, no doubt cognizant that simply walking through the desert and falling over won't cut it this time. For what it's worth, he's pretty good, boasting line delivery and comic timing that put certain other action heroes to shame -- although his love scenes could still use some help. Mel Gibson needn't quake in his boots, and Vin Diesel may be a tad more versatile, but Keanu and Ah-nuld had better watch out.

Most pleasingly, director Chuck Russell (A Nightmare on Elm Street 3: Dream Warriors) hasn't fallen prey, despite the MTV demographic he's aiming for, to the desire to make everything a series of quick cuts and annoying editing effects (pay attention, Ridley Scott). Thanks, perhaps, to having a star who knows how to fake a fight better than most stuntmen, he's able to set the camera back and let us watch the battles in a coherent fashion.

The movie isn't exactly a masterpiece. Most obviously flawed is the soundtrack -- which vacillates between heavy metal riffs, pseudo-Egyptian, and John Debney's excessively silly love theme, which only underscores the cheesy close-ups of Hu gazing longingly at the Great Eyebrowed One -- and the latter's weakness in romantic scenes. (The all-metal "soundtrack" CD now in stores features -- with two exceptions -- songs found nowhere in the film.) But Chuck Russell doesn't make masterpieces -- he makes good B movies (The Mask, The Blob), and The Scorpion King more than ably meets those standards.