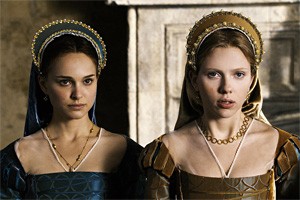 When you sleep with the king, it ceases to be a private matter." And so it comes to pass that young Mary Boleyn (Scarlett Johansson) must stand before her father, Sir Thomas (Mark Rylance), and her uncle, the Duke of Norfolk (David Morrissey), and report the nitty-gritty details of the sex she just had with King Henry VIII (Eric Bana).

Obsessed with gaining the King's favor, the Duke's original plan was to have Mary's older sister Anne (Natalie Portman) become Henry's mistress, giving him the son — and heir — that his wife, Katherine of Aragon (Ana Torrent), has not. But Anne overplayed her hand and offended the King, so the Duke threw Mary in his path. And though initially resistant, she quickly melts before Henry's charms. "Your face is the sun," the King tells Mary by candlelight. "One shouldn't gaze too long."

Alas, in the royal palaces of the 16th century, love was as fleeting as it is in today's Hollywood. In a flash, Mary is out of the King's bed and Anne is in. Like its literary source, this adaptation of Philippa Gregory's 2001 novel plays fast and loose with chronology and incident, telling us that Anne wanted so badly to be queen that she withheld sex from Henry until he got a divorce from Katherine. Seemingly driven mad with desire, the King demanded that the Pope annul his long-standing marriage to Katherine, a request Rome refused, which led Henry to forever break from the Catholic Church. Thus was born the Church of England. (The movies sure beat school.)

Anne Boleyn's power grab has inspired many a movie and TV series, but the real story is complicated as hell, so The Other Boleyn Girl sticks tight to the girls. Portman and Johansson don't disappoint. Stuck for years playing young women who are the idealized objects of male desire, they come alive here.

But history can't be denied (though studio heads do try), and the film gets downright grim in the home stretch, as Anne's sordid and bloody destiny reveals itself. The filmmakers deserve credit for being serious-minded, but they might have hinted at the top of the film that all would not be well in the end. Moviegoers who don't know Anne's fate in advance are likely to leave the theater feeling glum. History class, as you might recall, can be a total bummer.

Jump to comments (0)
« Will Ferrell’s Semi-Pro is half bad — his half   |   Jason Statham finally breaks out in The Bank Job, a film too fast and fun to fact-check »