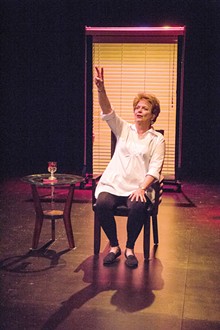 Performing self can be a tricky, if not terrifying, business for an actor. Many will confirm that one of the reasons they got into acting was to escape themselves and hide behind the persona (Latin for mask) of a character, assuming a fictive personality and speaking the fabricated lines of a, most often, absent playwright. Even Laurence Olivier, arguably the greatest English speaking actor of the twentieth century, confesses in his autobiography to finding relief "when some character part called for a sculptural addition to my face, affording me the shelter of an alien character and enabling me to avoid anything so embarrassing as self-representation."

This aesthetic denuding is just one of the many onion-like layers of bravery and risk revealed in Christine Howey's remarkable performance of her own play, Exact Change, performed in the intimate Helen Rosenfeld Lewis Bialosky Lab Theatre in Playhouse Square. In this 80-minute theatrical maelstrom of text, memory, activism, and poetry, Howey and her director/collaborator Scott Plate have fashioned a riveting evening detailing Howey's transition from Richard to Christine in a manner which defiantly eschews any preconceived expectation an audience may have had from such a narrative.

The set is as bare as Howey's soul: a chair, table, three Venetian blinds covered window units, and a small projection screen. Then Christine enters, wearing a loose white blouse and black leggings, reminiscent of Elaine Stritch's ensemble in her own solo exercise of her "existential problem in tights" in Elaine Stritch at Liberty. From that point, the stage is filled to bursting as Howey portrays a myriad of diverse and engaging characters, including herself at different ages (and genders), her mother, wife, and daughter, friends, mentors, and antagonists.

With her commanding presence and richly theatrical voice(s), Howey journeys through a series of more than 20 short supertitled vignettes, augmented by projected photographs from the baby her parents named "Dick" (with no sense of the irony that name would later assume), through her careers in advertising, teaching, and acting, her pre-operation forays in social groups for straight cross-dressing men, and finally her search for Christine's identity.

While the characters range from her ever practical mother who frets over how to introduce her new daughter to friends, to Dolly, a delightfully faded Southern Belle drag queen who teaches her strength and self-reliance, Howey imbues each with a subtlety and truth which never allows them to swerve into caricature. The only exception is the elusive character, The Enforcer, who tempts Richard with thoughts of suicide and is played with an over the top approach similar to Lucifer from medieval cycle plays. However, even that choice is indicative that the evening will never veer into cheap sentiment, which could be an obvious trap and downfall in less accomplished hands.

Beyond the performance, though, the throbbing center is the writing and construction of the play itself. The language is deft and clarion, and never tries to mask the obvious intelligence of the writer/actor. In an instant, it can shift from hilariously graphic descriptions of how to learn to pee without the familiar male equipment to exquisite poetry about isolation and otherness. It is the overt intellect and theatricality of the piece which triumphantly disallows the audience or character to bask in comforting emotion and expected compassion. It is frank and honest, but this is no confessional.

Howey and Plate have expertly fashioned an almost textbook example of Brechtian distancing which forces the audience to think about the issues rather than feel for the character. Howey neither asks for nor needs our understanding, forgiveness, or empathy. This is where the true brilliance of the play is centered. The projected supertitles of each vignette, the lightning shifts from one piece to another, the use of photographs, and even the exercise of the playwright as actor, always remind us that we are sharing a social, political, and philosophical paradigm shift which is greater and more important than the story at hand. The most telling example is during a segment entitled "My Passing," which simultaneously celebrates Christine's "passing" as a woman in public while reminding us of Richard's "passing" from existence. For one, exquisite moment, we see Howey's triumph and loss, and then it is gone. We are not allowed to lose sight that even this moment is a vehicle in service to the greater objective of the story.

Benjamin Gantose's lighting design is simple and evocative, and like James Kosmatka's sound design and video editing, is always in support of the performance and text. The use of the Venetian blinds aptly provide a metaphor for Howey's journey, providing both protection from and a means of witnessing an outside world which had never heard of Caitlyn Jenner or Laverne Cox. They are such a simple, yet important presence that it would have been more interesting to see them used as screens for the projections of titles and photographs, involving them more in the action and dispensing with the projection screen, which seems unnecessary and out of place. Similarly, the inclusion of projected transgender statistics toward the end of the show seemed tacked on and bowing to the expected. But these are small quibbles which in no way detract from the overall power of the piece.

There is one particular moment which epitomizes the bravery of portraying self in this production. It will not be revealed, but its impact lives in the memory. By the simple removal of one piece of accoutrements, Howey stands naked, triumphant, vulnerable, and invincible. In that one, breathtaking theatrical moment, we see that our future is never without our past, and the extraordinary courage it takes to be, or become, ourselves.

Michael Mauldin is an actor, director, Associate Professor and Founding Chair of Cleveland State University's Department of Theatre and Dance.

Jump to comments (0)
« A Family and Their Friends Face Existential Angst in the Excellent Three Sisters by Mamai Theatre Company   |   What Would Jesus Sing? »