Sex and the Ditty

From sticking keys in the ignition to exploring Uranus, no metaphor's too outlandish for R. Kelly. 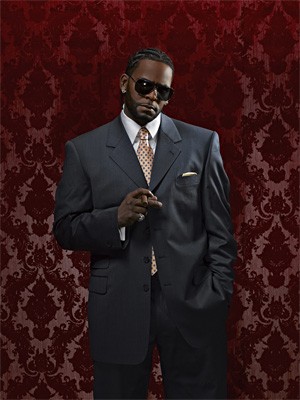 Rick James had it wrong. That girl he sang about in "Super Freak"? She doesn't even come close to the world's freakiest super freak: R. Kelly. The R&B chart-topper, alleged pedophile, and consummate booty-lover can't even tour without causing tons of controversy.

A few years ago, Kelly abruptly left his and Jay-Z's co-headlining Best of Both Worlds Tour after he claimed to have been maced backstage by one of Hov's handlers. Just a few weeks ago, singer Ne-Yo left Kelly's current Double Up Tour for unknown reasons. Kelly also recently lost his longtime publicist, allegedly because the singer slept with her stepdaughter.

At least Kelly keeps his sexual metaphors in check throughout most of "Closet's" myriad twists and turns. Which is more than can be said for the majority of his other songs. Over the past decade, Kelly's albums have increasingly loaded up on imagery that most seventh-graders would think twice about before saying. Then again, you really don't expect a guy who titles his songs "I Like the Crotch on You," "Feelin' on Yo Booty," and "Hit It Till the Morning" to get too clever with his lyrics.

Yet Kelly's become the master of Acme-anvil-heavy metaphors, stuffing his cuts with can't-even-bother-to-wink sexual similes that would make Benny Hill groan. Needless to say, subtlety is not one of Kelly's strong points. Witness: "My rocket is so full of fuel, baby," "Girl, I got you so wet/It's like a rain forest/Like Jurassic Park/Except I'm your Sexasaurus," etc.

The Double Up Tour comes to town this week. To mark the occasion, we offer some of Kelly's all-time greatest sexual metaphors. From musical instruments to galaxy-hopping astronauts, nothing escapes the breadth of Kelly's booty-obsessed rhymes.

"You Remind Me of Something" (from 1995's R. Kelly): "You remind me of my Jeep, I wanna ride it/Something like my sound, I wanna pump it/Girl, you look just like my cars, I wanna wax it/And something like my bank account, I wanna spend it." Beep-beep!

"Ignition" (from 2003's Chocolate Factory): "Girl, please let me stick my key in your ignition, babe/So I can get this thing started and get rollin', babe/See, I'll be doin' about 80 on your freeway/Girl, I won't stop until I drive you crazy." Vroom!

"In the Kitchen" (from 2005's TP.3 Reloaded): "Girl, I'm ready to toss your salad/While I'm making love, girl, I'll be feasting/Girl, you're in the kitchen, sweating up a storm/The oven's on 500/So you know the kitchen's warm/Girl, you know just how to get into a brother's mind/Cuz here we are still in this kitchen/Doing it for the third time." Yummy!

"Remote Control" (TP.3 Reloaded): "I'll be your remote/Touch me, turn me on, make me sing a song/Now put me on slow/Baby, push 'enter,' now 'fast forward'/Girl, you got me programmed, under your control/Something about the way you turn it over and poke it out/Said it makes me want to grab the remote and put that ass on pause." Click!

"Sex Weed" (TP.3 Reloaded): "Girl, your shit is the chronic/Cuz I can tell by the way you roll it up/Make a playa wanna smoke it up/Slow down so we choke it up/Sex give me the munchies/And now I wanna eat it up." Smokin'!

"The Zoo" (from 2007's Double Up): "Turn your body around, and beat the skins like it's a bongo/A thousand birds up out the tree/Girl, like a swarm of bees/That is how it's gonna be/Climaxing you and me/Touch the root of your soul, let Mother Nature take control/Over us is rain and leaves/So come on, girl, let's plant these seeds." Wild!

"Sweet Tooth" (Double Up): "Got a sweet tooth for you, girl/Baby, I'm tempted to taste/I can't wait to drink your milk/You're looking like a big ol' piece of cake/I'm all up in your middle/Ooh, it taste like Skittles." Sweet!

"Sex Planet" (Double Up): "Now it's just us both, I've got the controls in the middle of darkness/Girl, relax and just flow/I'm about to twinkle it and touch your soul/Once I enter into your black hole/Girl, now that you're next to me, we'll be just like satellites/Watching over the earth, we'll make space our paradise/Girl, I promise this will be painless/We'll take a trip to planet Uranus." All aboard!