No matter how you like it, Martini Madness will satisfy. 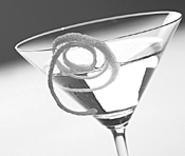 All the hoopla over the NCAA hoops tourney made Ilona Simon think: If fans can go nuts over March Madness, they'll surely get fired up over her Martini Madness. Every March, the owner of Budapest Blonde hosts a two-hour taste-test of five martini samplers, from the lemony Blondetini to the velvety Chocolatini.

The newest entry on the menu is the CoffeeBeantini. "Starbucks sold their soul to the devil," says Simon. "They're doing a coffee liqueur, and it's fabulous." If the samplers don't whet your whistle, Simon sells the martinis in 10-ounce glasses. "Nobody can drink five of those in two hours," she says. "But it's crazy. Kind of how you feel when the night's over." Martini Madness is from 7 to 9 p.m. Wednesday, March 9, at Budapest Blonde, 6901 Rockside Road in Independence. Tickets are $30; call 216-328-8780. -- Cris Glaser

Seth Thomasson wasn't even born when Mork & Mindy went off the air in 1982. But the Kent State sophomore claims he's a "Generation-Y whiz kid" at Toxic Pop. It's a weekly '80s and '90s trivia test and film night at the gay club Adams Street. "When I was in high school, my dad would drag out Trivial Pursuit, and we'd play that on the weekends," recalls Thomasson. "I give that game all the credit for me being unstumpable." Quick, Seth: What was Mork's signature catch phrase? "Nanu, nanu." In what boy band was Ricky Martin a member? "Menudo." Who was vice president under the first George Bush? "Let's stop right there," he says. "I don't do Republicans." Toxic Pop is at 9 p.m. Thursday at Adams Street, 77 North Adams Street in Akron. Admission is free; call 330-535-9794. -- Cris Glaser

In the surreal Japanese flick Bright Future, a pair of twentysomething pals drift through dull lives, toiling at monotonous factory jobs, eating sushi with their boss and his family . . . and caring for a poisonous pet jellyfish. When one of the guys is incarcerated for a crime that's never really explained, the movie loses even more focus, as it turns into a conflict between generations. But it sure looks great, especially when the luminous sea creature spawns progeny and slowly migrates toward Tokyo. It shows at 7 p.m. Thursday and Sunday at the Cleveland Cinematheque, 11141 East Boulevard. Admission is $8. Call 216-421-7450 for more information. -- Michael Gallucci