Shooting for the Stars

For Marc Millis, Milky Way runs take longer than a trip to the vending machine.

Send a News Tip
Where the Money Is 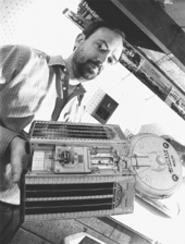 Walter Novak
Marc Millis and a spacecraft model he made in the basement.
The closest thing NASA has to an interstellar space capsule, hurtling through galaxies at warp speed, is an office cubicle parked in Cleveland. Even Dr. Who, famous for traveling to other dimensions in a hotwired British call box, had ritzier digs.

But hey, if a humble call box can make it from Earth to the Planet Galifree, who's to say a cubicle, or at least the collective brainpower filed therein, couldn't squeeze its way out of the solar system?

The cubicle in question belongs to Marc Millis, head of the Breakthrough Propulsion Physics Program at the NASA-Glenn Research Center in Cleveland. It might look earthbound enough, with his daughters' grinning grade-school pictures clustered on the shelf, but it's really Space-Time Travel Central, the paper-strewn control room for some far-out (as in distances that would take an ordinary rocket 900,000 years to reach) thinking.

For now, the only interstellar traveling going on is in the cerebrums of some of the world's top physicists, brought together by Millis for brainstorming sessions, their best ideas for faster-than-light transport written on Post-It notes and tacked to a chalkboard. Except for Millis, they essentially volunteer their time for this daring yet minuscule NASA program that tries to circumvent the laws of physics to make it to the Milky Way.

On the two occasions this select group has met, they've only had a weekend to hammer out a plan, so Millis plays drill sergeant, keeping them from straying too far off course. This is a federally funded project, so they've got to be in tune with the bottom line as well as the expanding universe.

"You're trying to get a lot accomplished in a little bit of time, which is a constant pressure," says Millis, an ordinary rocket scientist who studied space-time travel on the side before NASA asked him to commandeer the Breakthrough program in 1997. "To crunch all of it down is grueling, and by the end of it, you're exhausted."

To reach the next star system in less than the next nine centuries, even the most advanced rockets would be impractical, Millis explains. Not having a millennium or so to spare, the best minds have to be more visionary, entertaining theories that might be mentioned more in science fiction than in science labs. Ideas like wormholes (shortcuts through space), warp drives (like moving sidewalks in an airport, the idea that the four-dimensional space-time itself -- not just spacecraft -- can move), and the possibility that there might be enough vacuum energy in a coffee cup to boil the earth's oceans.

If Millis's group can figure out even one of three big ideas -- pushing spacecraft with methods other than rockets, bypassing science's existing limits to expand space-time, and making some energy breakthrough to power propulsion devices, "It would revolutionize space flight," says Millis, though it could take a decade or 10. And if they can figure out all three, "We would be enabling human travel to other star systems, which would definitely change the course of humanity."

Ever since the hairy-knuckled Lucy glimpsed the diamond sky, burgeoning space cadets have dreamed of travel to other worlds. And judging from the stack of unsolicited proposals on his desk, Millis, who's good at generating public interest in his work, has heard from just about all of them. It seems that everybody and his brother-in-law with spare time and a soldering iron considers him a sympathetic ear.

"The classic ones are the ones that have claimed to have seen a UFO and thus understand how it operates, and want to share that," he says, heaving a thick blue binder from his file cabinet. "This was one submission, largely repeating itself, and definitely not credible work." Another dissertation features color photographs of a homemade metal cylinder wired to a workbench.

"A lot of them are amateurs just submitting their idea, wanting an evaluation of some sort. Somebody in their basements. No problem, just use my little spinning gyro in my garage, and pay me several billion dollars, and I'll have you a space drive."

And then there are the researchers whose credentials go beyond sharing a Vulcan handshake with Leonard Nimoy in Schenectady. Piled between more paperwork is a stack of even more paperwork -- Millis's "Get To" pile, where some 130 legitimate proposals await. His less-than-whopping research budget of $450,000, to be divided among the five best proposals, is barely enough to buy a side mirror on the Hubble, let alone passage to Alpha Centauri.

"Because this is reaching very far out, we're trying to do it in small, prudent steps and making sure that, before we escalate the funding, we're at the stage where it's a smart thing to do," he says. "A large part of this early work is finding out where's the edge where you could actually begin serious work from. Now, there's obviously an edge beyond that."

The bucks are still bigger than Millis was getting as a freelancer, part of an informal group of researchers "looking beyond what is normally being supported to see if anything's there." That was strictly in his spare time, while by day he worked on ion thruster rocket engines and took roller-coaster-style rides in Learjets during test flights for low-gravity trajectories.

"The people who do work like this, they have their day job, and they're doing it on the side," he says. A father-and-son team in California started a professional group called the Interstellar Propulsion Society, but otherwise, Millis's program is one of a kind.

And so, in a sense, is Millis. A gift for "differentiating between wishful thinking and something that might have some potential of working" made him the natural choice to run things, says Glenn Mucklow, supervisor of the NASA Office of Space Science in Washington. "With all the publicity of Star Trek and the science fiction out there, there are a lot of people who want to invent things that don't work and can't work, so we need to filter those out."

Millis also has a gift for bridging light-year leaps between physics and pop culture. His NASA website, "Warp Drive, When?", compares the time it takes for a conventional spacecraft to travel vast distances to the lifespan of a Twinkie left in the glove compartment. (The Twinkie comes up short in the end.) And it shows how science fiction, from Jules Verne's cannon blasts to the moon to Flash Gordon's routine rocket trips that preceded the space shuttle, sparks a lot of fresh ideas for space travel that aren't exactly on target.

Verne's "From the Earth to the Moon" story, which, in the 19th century, foresaw three adventurers making the moon trip from a peninsula, is the classic example of real life not quite imitating art, says Millis. "Often people say [about the first moon mission], "Yeah, it was three people, and they launched from a peninsula.' Yeah, but they were launched by a rocket, not a cannon," something Verne failed to envision.

A 40-year-old father of two, who's working on building a 1960s-style slot car track -- rather than a spinning gyro -- in his basement, Millis came to NASA fresh from an undergraduate physics program, ready to revolutionize space travel.

"Actually, running this project was not what I had in mind for myself," he says. "I wanted to be one of the researchers, but the catch was, there was no program under which to do the research."

When Millis was growing up in Smyrna, Georgia, Apollo 11 landings imprinted his psyche, rather than the latest episodes of Star Trek. (He has, however, pressed flesh with more than a few Klingons, having lectured about interstellar space travel at Star Trek conventions, where he found a surprisingly educated and enthusiastic audience.)

"I was very much inspired by the Apollo program," he says. "As a kid growing up, you start asking yourself, What do I want to do when I grow up? And you look to the images at the time -- there was Vietnam, there was Apollo. If I had my choice of doing only one, I'd certainly pick Apollo over Vietnam."

As he got older, the lunar glimmer faded a little, as it did for most Americans. "I made the mistake of thinking the Apollo program was chosen for the actual benefits it would have -- it would be inspirational, a focus goal to pull the nation's intellect together to accomplish things of greater good and human worth that would inspire students and give the nation some purpose that was constructive. As opposed to realizing it was some macho-competitive thing with the Russians."

He also overoptimistically thought that rockets would be ancient history by the time he grew up, "and they'd be looking for what comes next." When he arrived at NASA as a fresh-faced student in the 1980s, building a better rocket was still the main mission. His job involved a more space-aged, ion-powered model, but it definitely wasn't warps and wormholes.

But in 1989, Millis and a now-retired NASA manager named Les Nichols decided to form a kind of support group for big thinkers, called Vision 21. There, scientists could talk freely about anything radical -- not just interstellar-related, but also in areas like airplane propulsion, advanced computers, and virtual reality. That helped foster the Breakthrough program as well as several other leaps in NASA research.

Joining Millis in the Vision 21 program was Geoff Landis, a staff physicist at NASA's Ohio Aerospace Institute, also based in Cleveland. When not working on methods of making an interstellar spaceship propelled by a laser beam, he writes science fiction (he's won a Hugo and a Nebula award) and studies the characteristic signatures of wormholes. Or, roughly, how wormholes, if they do indeed exist, might look through a telescope.

Landis was one of the "constructive optimists" Millis invited to his first brainstorming session, along with a few "constructive pessimists" -- including Lawrence Krauss of Case Western Reserve University, author of The Physics of Star Trek -- to throw them curveballs. They considered crackpot ideas as well as credible ones, but didn't mull over them, because there was precious little mulling time. Most of these ideas NASA hadn't considered since the 1950s.

Besides messing with Einstein's theory of relativity, which rules out faster-than-light-speed travel, Millis has a few other hurdles. One is the rather practical dilemma of what to do when you do hit a warp drive or wormhole, end up returning home before you left, and stop yourself from taking the trip in the first place.

Such a paradox "might be a genuine showstopper," Millis guesses. Perhaps Dr. Who could lend a hand.