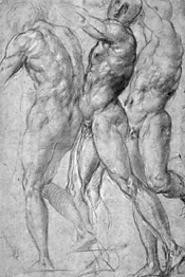 The 21st-century eye is hard to impress. It's accustomed to paintings as realistic as photographs and computer-generated movies that render Buzz Lightyear flesh and blood. The eye forgets -- or maybe never realized -- that today's visual wonders are the fruits of centuries of pictorial and technical innovation.

Not surprisingly, attracting our attention is an ever-increasing challenge for advertisers, filmmakers, artists, and even museum curators. Especially when the images are 500-year-old drawings of mythological and biblical figures, and the once-revolutionary techniques used to create them have been stock tools of artists for centuries. It gets even harder when the works in question have become stale from years of reproduction.

Raphael and His Age: Drawings From the Palais des Beaux-Arts, Lille, now on view at the Cleveland Museum of Art, presents such curatorial challenges. The exhibition, the result of CMA's involvement in the French Regional American Museum Exchange (FRAME), features 57 drawings: 25 by Raphael, the rest by a dozen other Italian artists of the High Renaissance.

The FRAME consortium of nine American and nine French museums was created to open museum collections to wider audiences. But the FRAME curators and CMA's supporting curator, Carter E. Foster, seem to have difficulty conveying the significance of Raphael's work to that wider audience. That Raphael's drawings are breathtakingly beautiful is obvious; the artist's role in the greater current of art history is not. And while the techniques used to create each drawing are well explained, the historical significance of the works is not.

This is a show that demands -- but does not receive -- a serious dose of easily digestible biographical, cultural, and historical background. Since the works' mythological and religious subjects themselves are not crowd-pleasers, and the drawing techniques, though beautiful, are familiar, museumgoers could use an extra push to appreciate Raphael's sweet Madonnas and robed saints. These drawings may excite the art world, but they won't reach the guy who thinks Raphael is a Mutant Ninja Turtle. And CMA leaves him hanging.

Until the mid-19th century, Raphael was considered the greatest, most influential painter who ever lived -- no small feat for someone who was orphaned at 11 and who died at age 37. He was granted the status of "master" painter by his hometown guild at 17; at 25, he was commissioned to paint frescoes on the walls of Stanza Della Segnatura, the pope's Vatican apartments. At 31, he was appointed architect to St. Peter's in Vatican City.

Raphael's Madonnas are among the most famous paintings in the world. Unlike any artist before him, he painted lifelike figures, then set them in motion in a believable three-dimensional space. Vasari, the 16th-century painter and chronicler of Italian Renaissance artists, wrote, "Although other paintings may be called paintings, those of Raphael are living things: for their flesh seems palpable, they breathe, their pulses beat, and their lifelike animation is conspicuous." Raphael, in other words, created the 16th century's version of virtual reality.

Raphael's genius was his ability to assimilate the pictorial inventions of his contemporaries (including Leonardo and Michelangelo) and 200 years of Italian art. He selected from each artist what he could use best and created a style that painters would try to emulate for the next 300 years.

Unfortunately, museumgoers who don't know this going in won't know it when they leave, either. Perhaps additional chat labels or brochures would have helped. Still, the show boasts exceptional drawings that shouldn't be missed.

The exhibit is housed in the museum's newly refurbished manuscript galleries. Freshly painted cobalt-blue walls create a sophisticated backdrop for the drawings, still in their spare Lille frames. Raphael's drawings, which date from the first half of his career (1503-'13), get an entire gallery to themselves. Included are four important groups of drawings: his preparatory sketches for the altarpiece "Coronation of the Virgin" (1503) and sketches for "School of Athens," "Disputa," and "Parnassus," three frescoes painted in Stanza Della Segnatura between 1508 and 1510. Some of the drawings are exploratory, revealing the artist's search for the right pose, gesture, or facial expression.

Perhaps the exhibition's most beautiful Raphael drawing is "Drapery Study From the Model, for Christ in the 'Disputa.'" The head and body of a seated figure are barely suggested; instead, Raphael focuses on the task of depicting the folds of drapery encircling the figure. Also on display is his most famous pen-and-ink drawing, "Seated Male Nude Playing a Lira da Braccio, for Apollo, in the 'Parnassus.'" The model and instrument are confidently drawn with crisp, precise lines.

The other gallery features drawings chronologically arranged in three groups: Raphael's predecessors, contemporaries, and followers, beginning with Botticelli's study for an altarpiece called "Two Standing Men, for the 'Adoration of the Magi.'" The exhibition's flow is slightly disrupted by the gallery's dual entrances and by two walls that divide the room. One entrance leads to Botticelli, the other to the group of contemporaries. Oddly, the drawings of Fra Bartolomeo, a Raphael contemporary, are in the section marked "Raphael's Followers," which could be confusing for the uninitiated.

One of the most breathtaking images on view is the famous red chalk drawing "Three Male Nudes" (1517-'18), by Raphael follower Il Pontormo. The work is a study of muscular bodies moving in a sequence that suggests motion. An equally engaging drawing, Francesco Salviati's "Standing Female Nude" (circa 1530) showcases the artist's ability to subtly model surfaces without leaving a trace of individual chalk strokes.

"It's amazing how many different ways those Italians found to portray Mary and her child," announced one middle-aged visitor as he scanned the exhibit, lingering about five seconds at each work. Too bad he couldn't see beyond the subject matter to the beauty of the once-innovative drawing technique.