A trio of sexual misfits torture each other in Red Light Winter. 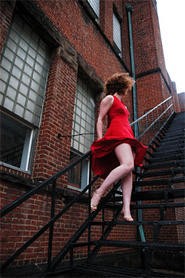 It's probably a good thing that the friendly folks at the Bang and the Clatter Theatre offer a free bottle of imported beer or a glass of wine upon arrival. And it's an even better idea that, before the curtain goes up, co-founder Sean McConaha and helpers come out with more bottles for anyone desiring a last-minute refill. With the house lights on, it's all happiness and conviviality, like a frat party without the roofies and puking.

But once the play starts, the mood in this theater often changes drastically, since B&C tackles some of the seamiest and most challenging material around. Red Light Winter by Adam Rapp is a perfect example: a squalid little exploration of the back alleys of young, unrequited love. Even though the script careens wildly from lean and painfully pointed dialogue to lumbering passages, the three performers and director McConaha manage to fashion an evening of theater that sticks with you, even if you wish it wouldn't.

Two thirtyish American college chums, Matt and Davis, are sharing a nasty hotel room in Amsterdam's red-light district, where introverted Matt is futilely trying to write -- when he's not battling diarrhea or halfheartedly attempting suicide. His whole life seems a disaster; he explains his favorite activities as "drinking a lot of Robitussin and being addicted to online bridge." After having won an award as an "emerging playwright," he seems to have stalled in the middle of his own first act.

Meanwhile, freewheeling Davis -- a successful literary agent -- is sampling the carnal pleasures of sin city. Smoking a joint and swigging vodka, Davis is a nonstop, unfeeling joke machine, making fun of Matt's intestinal troubles and pushing the smaller man around at will. From the beginning, this setup is rife with problems, since there is no clear reason why Matt would travel across the pond on a trip with boorish Davis -- especially since we learn that Davis is now married to Matt's former (and, as it turns out, only) girlfriend.

It turns out that Davis has a secret agenda for Matt -- in the person of Christina, a French whore Davis picked out of one of the storefront windows on the street below. After sampling her wares repeatedly, callous Davis drops her in front of his nervous friend, like a well-used chew toy, in hopes he can end Matt's three-year drought. But it's clear that there's more going on here than one buddy helping another; Christina is hooked on Davis, who takes every opportunity to jab and denigrate the almost totally defenseless Matt. In short, it's a fun trio.

The first half of the show sparks and sizzles with playwright Rapp's incendiary and gleefully obscene dialogue, easily outdistancing the plot wrinkles. Davis has most of the best lines: He refers to Christina's safe-sex practices by saying "She wanted to put a three-ply condom on me. That's like getting a massage in a snowsuit." But Matt also has his moments. After Davis complains that Matt didn't understand a brutally obvious point Davis was making, Matt replies, "Yeah, that was pretty layered."

Eventually, we learn the truth about Christina's nationality, and once Davis splits, she finally lures the reluctant Matt to bed. They get it on in a scene that is as believable as it is slightly pathetic, with Matt shooting his wad almost prematurely and Christina eventually shuffling out the door.

Much of the promise engendered in act one is squandered when the scene shifts back to Matt's apartment in New York City a year later. First, Christina shows up, sick with AIDS and looking for Davis. She doesn't recognize Matt, and later, Davis doesn't remember her. Hey, these people are a little druggy, but they're not Alzheimer's patients. As a result, everyone has to be reintroduced, and some old tensions are revisited, generating a tedious sense of déjà vu. Even a shocking act near the end that exposes Davis' true nature doesn't revive the spontaneous pulse from earlier on.

Doug Kusak is a thoroughly credible egghead-nebbish as Matt, flinching involuntarily when he's around Davis and whimpering like a little puppy around Christina. Large and loud Mark Mayo conveys Davis' sleazy character traits, but often pushes his readings over the edge, making Davis feel a little too desperate. As Christina, Laurel Johnson is properly sensuous and has some telling moments when she comes on to Matt, but the script makes her disappear into her ailment in the second stanza, which doesn't help the dramatic flow.

There is a lot of vibrant material in Red Light, but it's too often buried under the playwright's excesses. Oh, and in case you're wondering, the Merlot had a mellow, oaky finish.