Tale of the Allergist's Wife is a sitcom masquerading as a play. 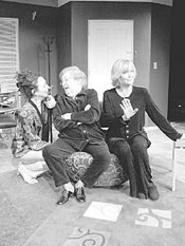 "The funniest play I have ever seen in my life!" Rosie O'Donnell said of The Tale of the Allergist's Wife. But then, Rosie's history of questionable taste includes an asymmetrical she-mullet and a lifelong affection for the talent of Donny Osmond. Though it's as funny as one of your better sitcoms, the show's script suffers from lack of a substantive core; more specifically, from a title character who is static, grating, and unsympathetic. The Tale of the Allergist's Wife is effervescent in parts, with some fun characterizations, but ultimately its lack of depth keeps the comedy out of the realm of art and in the territory of the best of The Golden Girls.

Marjorie Taub, played by Jeanne Task in this Dobama Theatre production, is a New York Jewish intellectual with a social conscience. She volunteers for Planned Parenthood, she wrote a too-creative, never-published novel ("I even invented my own form of punctuation"). She playfully scolds her husband for thinking that Waiting for Godot is about two guys waiting for AAA. She tries much too hard, is perpetually in want of fulfillment, and peppers her conversation with perhaps one Siddhartha reference too many.

When we join Marjorie, she is recovering from a Nervous Breakdown Lite -- a mildly violent protest against her frustrated life and thwarted dreams of true intellectualism -- that occurred in a Disney Store, where, one by one, she shattered costly figurines of cartoon icons. That might have been the more interesting play: The Allergist's Wife in the Disney Store. We could have seen some genuine tension, instead of mere whining, or perhaps the events that led to her crisis and her earnest, hapless husband being left literally to pick up the pieces. What playwright Charles Busch has given us instead in the "why this day is different" arena is a chance reunion between Marjorie and Lee, a childhood friend.

Lee (played by Laura Perrotta) is a muse, a free spirit, a pansexual globetrotter who is also wicked with a wok. Lee's colorful, star-studded life includes having shared cans of soup with Andy Warhol ("I think I may have planted a seed"), being present at the recording of "We Are the World," and giving Spielberg the idea for E.T. Busch gives Perrotta no room to coast; this wondrous and terrible force must be charismatic enough to shake up the humdrum lives of Marjorie and her husband, and likable enough to win over Marjorie's irascible mother merely by dropping the name Andy Griffith. And Perrotta is thoroughly up to the task. She's one of this production's true heroes, turning in a performance as well balanced and dynamic as a spinning top.

Which brings us to another of the production's high points: Myrtle Silverman, a natural presence who's wickedly hilarious as Marjorie's perpetually constipated mother. Forever trying to score a suppository, the old biddy is a feisty, profanity-spouting, pull-no-punches granny. Greg Violand is dead-on as the phlegm-obsessed allergist, his erotic inner turmoil given expert comic play when faced with the possibility of a ménage à trois with his wife and Lee, who wants to slather them in scented oils. "We're both allergic to floral scents," he deadpans, before giving over to temptation in one of the play's most expertly staged and well-executed scenes. Rajiv Punja is also a strong presence, understatedly stellar as the detached and insightful doorman Mohammed.

Though The Allergist's Wife contains some humorous characterizations, they aren't particularly inspired or original. Lee drops one name too many, and Marjorie's bored-housewife-lusting-for-adventure story has been told too many times. In comedy, perhaps more so than drama, the stakes must be high, and the protagonist must evoke empathy. At Dobama, they're doing the very best they can with what they have -- including an uncharacteristically elaborate set -- but in this weather, better to subscribe to HBO than leave the house for a semi-spicy sitcom.