Bill Peters lays it out for you. 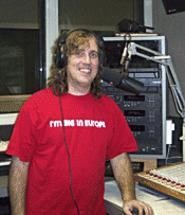 What have you been listening to lately?
The new Axehammer Windrider CD, released on the Sentinel Steel label, is excellent, classic '80s-style metal. And I've been playing an Italian band called Martiria (featuring former Warlord singer Damien King III) and a new NWOBHM compilation, Lightnin' to the Nations, celebrating the 25th anniversary of the movement.

Oh yeah, I shouldn't forget to mention the Venom marathon I've carried on into the new year. For Christmas, my wife bought me the new Venom four-CD boxed set. I've been playing it so much, my kids know all the words to "Witching Hour." I hope they don't start singing that song in school or something.

What albums have most defined this city's metal scene over the years?
I try to feature as much as I can on my Friday-night radio program to help the bands out. Aside from all of my past Auburn releases (Breaker, Destructor, Shok Paris, Purgatory, Black Death, etc.), other albums that have defined the scene include releases from Mushroomhead, Chimaira, Environmental Hazzard, the Spudmonsters, and the Manimals, to name a few. There are just too many to list.

What were some of the most overlooked albums of the past year?
Without question, Sweden's Astral Doors' album Evil Lives Forever. This is one of the best metal bands in the underground today. Other overlooked albums include Dawn Rider, Fate Is Calling (Pt. 1); Bolt Thrower, Those Once Loyal; Moonsorrow, Verifakeet; Candlemass' comeback album, Candlemass; and Gamma Ray, Majestic.

What do you put on to give your ears a break from raging thrash?
Ninety-nine percent of the time it is, in fact, blasting metal shaking these walls at home or on the road. I do have a secret love for Cusco and vintage NFL Films music, though. I guess those help wind me down a bit in the late-night hours and keep my sanity.