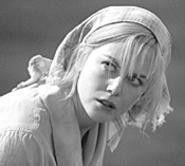 If only Dogville were at least involving enough to be perplexing. Sigh. In simplest terms -- which it definitely deserves -- Lars von Trier's latest thingamabob is a large, pretentious blob of coulda-been. As in it coulda been deep and insightful. It coulda been sociologically challenging. It coulda been formalistically thrilling. But it isn't. Sigh again -- three increasingly tiresome hours of sigh.

Of course, by now Trier -- the "von" is fake, and he's neither Sternberg nor Stroheim -- has accumulated such a following that he could crap on a paper plate and his cultists would clamber over each other to have it goldplated. Usually, this isn't merited: His Dogme 95 credo accidentally produced some intriguing work (mostly by other people), but remains a gimmick easily defined as "make slop," and his celebrated Zentropa is overrated. Trier's at his dubious best when he's making narratively lazy movies about cuddly girl-women suffering heinous fates, such as Breaking the Waves or Dancer in the Dark -- both somewhat moving, if terribly absurd. He tries to evolve this formula with Dogville, but basically ends up being gummed to death by his own toothless experiment.

The shtick this time is that Trier has created his fantasy of provincial America on a large soundstage, using chalk outlines in place of sets and sound effects to substitute for atmosphere. For about half an hour, this is moderately engaging, like watching a semi-elaborate stage play filmed in the style of a twitchy jeans commercial, with countless retarded jump-cuts in lieu of thoughtful direction. Trier, who has made a big, look-at-me deal out of never visiting the U.S., and who obviously understands approximately as much about the place as its current President knows of Vietnam, invites us to believe, via his cartoonish and kitschy approach, that we are in the Dogville of the title, somewhere in the Rocky Mountains of Colorado circa the 1930s.

Told through a prologue and nine protracted chapters, with John Hurt providing homey narration laced with doom, Dogville charts the struggles of what appears to be Trier's latest feminine alter-ego ("I was raised to be arrogant," she explains), none-too-subtly called Grace (a sleepwalking Nicole Kidman, who didn't sign on for the sequels). On the lam from mobsters -- including the ever-amusing Udo Kier and boring old James Caan -- glammy Grace flees up the "mountain road" to the "town" of Dogville, where she hides in the "mine." Soon she is taken under the protective wing of Dogville's self-appointed ethicist, Tom Edison Jr. (Paul Bettany, with accent and carriage gamely toeing the line of farce), who presents her to the townsfolk, suggesting that they harbor her in safety -- and plain clothes -- for a limited trial period.

Dogville's denizens basically represent a rethinking of Thornton Wilder's Our Town with a twist of Brecht. It's nice to see Lauren Bacall as a matriarch fussing over her gooseberry bushes. Stellan Skarsgard as a libidinous apple farmer and Patricia Clarkson as his obsessive wife are both excellent. Ben Gazzara plays a sight-impaired geezer who likes a good view, Cleo King is a loyal nanny, Zeljko Ivanek is a seemingly noble truck driver, etc. There are ambitious little stabs made at character complexity, socioeconomic struggles, and folks just being folks.

However, after Trier sets up his characters, it is we who are made to feel set up. Very predictably, things go sour. A long while after Grace is welcomed into the town, her reputation comes under fire, and for another long while, she finds herself increasingly put upon, then raped, tortured, and chained up like a beast. Since everything here is fake, though -- but for a few skeletal structures, some props, and attitude -- Grace's fall is hardly "harrowing," as some critics have suggested. It's likely that prior to opening in the U.S., the movie has bombed around the world, because its depiction of ghastly social ills is obnoxiously quaint. Right through the climax -- a trendy bit of redundancy which could be called "the pussy's revenge" -- annoyance, not outrage, is engendered. Then we're ushered out to some criminal misuse of David Bowie's "Young Americans," which, one supposes, is helping him pay for his own recently purchased mountain in upstate New York.

As with any grab bag, there is some good material tucked in amid the tedium. The character of Tom is very well written, concealing his lack of creative motivation with a heavy-handed moralism as he lies to himself about his true, base feelings for Grace. That's cool. The freakish family helmed by Skarsgard and Clarkson is cool as well. It's also fun that the town's mad, invisible dog is named Moses. That should keep the armchair religious theorists busy. And any artsy movie that enters the U.S. marketplace and attempts, even lamely, to hold up a mirror to its media-numbed populace -- well, that's gotta be worth something.

Still, frankly, Dogville is dullsville, and you can learn much more about America -- and Colorado in particular -- from watching the significantly more creative and enjoyable South Park: Bigger, Longer and Uncut. Or, if you prefer your hardscrabble mountain sagas dramatic, try The Claim, from Michael Winterbottom, who is a real director.