A young Parisian observes the exotic side of Barcelona life in L'Auberge Espagnole. 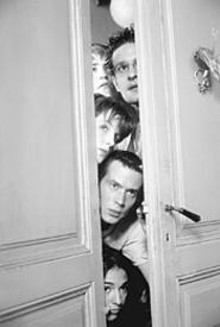 French putz Xavier (Romain Duris) is depressed. The poor guy lives in Paris, has Amélie's Audrey Tautou as a girlfriend, eats gourmet vegan dinners prepared for him by his free-spirited mother, and is being set up for a graduate degree in economics by a friend of his father's. "I don't know why the world became such a mess," he laments. "Complicated, made like shit, out of whack."

With L'Auberge Espagnole, writer-director-actor Cedric Klapisch simultaneously shows great moviemaking flair and reveals a very peculiar worldview. Ostensibly, this loose project is about Xavier's travails in Barcelona, where everything seems exotic and he hangs out with a virtual Benetton ad of multi-culti new friends. This is groovy, this is good. What's strange, though, is that Xavier loiters at the heart of this movie as a big zero, a nothing, a black hole. The self-obsessed nerd surrounded by interesting characters is a staple of moving pictures, from The Graduate to television's Northern Exposure to (shudder) American Pie, but Xavier -- clearly intended as a sympathetic character -- is simply a raving, lazy bore, bordering on a sociopath. One hopes Klapisch's energetic, albeit slapdash script isn't too autobiographical.

Anyway, if you can get around the main character, this nominee for multiple Cesars (the French equivalent of the Oscar) is indeed fun and engaging, rich in both insight and grotesque conceits, mixed together to the point that it's hard to tell the difference. Once Xavier leaves his mommy and girlfriend, and weeps on the plane, Europe's Erasmus student-exchange program lands him in Barcelona, a city so exciting and diverse that even his miserable perspective can't dampen our enjoyment of it. First crashing badly with Chilean friends of his mother, he swiftly segues to the couch of kindly neurologist Jean-Michel (Xavier De Guillebon), whom he met -- and instantly despised -- on the flight over. That Jean-Michel has been married only two weeks to delectable young Anne-Sophie (Judith Godreche) is a fact not lost on lonely, lusty Xavier.

After subjecting himself to a personality profiling -- which he passes as if he actually has one -- Xavier is welcomed into the funky student apartment that gives the movie its title. (While literally meaning "Spanish inn," l'auberge espagnole is also French slang for a free-for-all.) Essentially, what follows is a scripted -- and, ironically, more plausible -- take on TV's The Real World, Euro-style. There's some unwieldy voice-over narration and some fairly forced tragic-romantic interplay between Duris and Tautou, but if it weren't for the smart camera work and tidy edits, one would assume that the flat-mates were all just playing themselves.

Anyone who has ever lived in student housing or crashed in a hostel will recognize these folks immediately. Alessandro (Federico D'Anna) is the spitting image of young Geddy Lee and represents the rockin', free-wheelin' Italian in the house. Tobias (Barnaby Metschurat) is his meticulous German roommate, openly mocked for his German-ness by William (Kevin Bishop), a visiting English caricature who makes all English people look like unbearable racist swine. (Maybe this is French payback -- who knows?) Come to think of it, perhaps this lot isn't all that recognizable. But considering that this is a French movie, yet we don't have to watch a single one of them urinate, they're pretty comfortable company.

Two of the more interesting roommates -- who would've made much better leads -- are William's veddy English sister, Wendy (Kelly Reilly) and Belgian Isabelle (Cecile de France), the lesbian she dreads. "Techno music bores me, all right?" insists Wendy, earning this critic's immediate solidarity, but soon we see that she's desperate for adventure, even ready to take it in bed with an idiotic American lout who woos her with clichéd Bob Marley cover tunes. Alas.

Isabelle, meanwhile, is perhaps the movie's most problematic character. She and Xavier hit it off splendidly, and she even admits that she's sad he's not a girl. Then things get weirder. She teaches him how to seduce Anne-Sophie -- apparently, ladies just love to be goosed! -- then insists that "all women are sluts." When Xavier avidly takes to this premise, she firmly and immediately reprimands him. Her contradictions make her annoying, but her complexities make her intriguing, and one wonders who shaped this character -- and how much.

Klapisch, now middle-aged and possibly sentimentalizing youth's foibles, makes it easy to get into his movie, from the insta-cool soundtrack of Radiohead, Ali Farka Toure, and lovely Chopin to high-def video trickery, swooping past Gaudi's architecture or teetering through Barcelona nightlife. The characters grow pale and somewhat false by the end, but for most of the movie we get a smorgasbord of exciting interaction. It's only a pity that we're forced to behold most of it through Xavier's obscenely empty little soul -- the soul he absurdly claims to be that of a writer.