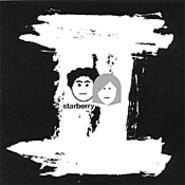 Like their self-titled 2002 debut, Starberry II only sounds as if it were recorded in a kitchen. Fact is, it was written and mixed in their kitchen, but recorded in the basement; the disc is rough but sincere. Pat's the drummer. Credited with "non drums," singer Jennifer harmonizes with herself through the magic of eight-track recording and plays guitar with just a hint of surf twang. Over a rhythm track with a subtle drum & bass influence, the album-closing keyboard instrumental "The Sweet Science" plinks and gleams, strongly suggesting that when they get a recording budget, Starberry will be good for a full meal.