Stars in Our Crown 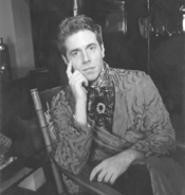 A Plateful of Oscar Wilde.
For the edification of Northeast Ohioans, three area theaters have imported a sampling of recent off-Broadway hits. But, happily, only the plays themselves are borrowed; the talent is all exquisitely local.

Three of our best talents -- Scott Plate, Catherine Albers, and David Robeano, at Cleveland Public Theatre, Dobama, and Beck Center, respectively -- are given the chance to show off their star quality.

The moniker "star" and its offspring "superstar" have become the language's most abused clichés. Stripping away the decades of media-inflated hyperbole, the essence of a star is someone we cannot take our eyes off; a performer imbued with boldness and self-confidence.

Scott Plate is such a performer. With blue eyes that shimmer with irony and pain, Plate is the St. Francis of Cleveland actors. In Angels in America, when confronted with AIDS and an avenging angel, he exuded martyrdom with a beatific glow. Now playing homosexuality's most beloved martyr, Oscar Wilde, he conquers the stage with the aplomb of a Roman emperor.

Playwright Moisés Kaufman's Gross Indecency: The Three Trials of Oscar Wilde concerns the public persecution of Wilde for flaunting Victorian morality in his art and personal life. Stitching together trial transcripts and various autobiographies of the period, Kaufman constructed what played off-Broadway as a crackling Brechtian docu-drama.

Unfortunately, director Randy Rollison has attempted to put his own stamp on it. Like a third-year directing student, he has overdirected a fragile work, stretching it into a Götterdämmerung morality play and crushing the life out of it. With the exception of Plate and a tender newcomer, Sean Sullivan, his actors fight a bloody battle against egregious accents and rummage-sale approximations of Victorian finery.

Yet a star can triumph over all adversity. Plate is a glamorization of the porcine Wilde. Pulling off a far greater accomplishment than mere physical approximation, he makes every Wilde aphorism seem fresh. He embodies the exquisiteness of Wilde's soul. Recalling this remarkable actor's pain and elegance, we think of Wilde's ode to beauty in a debauched world: "We are all in the gutter, but some of us are looking at the stars."

If an actress can't get a crack at The Trojan Women or something equally as intense, the next best bet for trailing glory is to play a cancer patient plangently knocking at death's door.

Wit, the surprise hit by a kindergarten teacher named Margaret Edson, may be the only play about the process of dying to be as darkly funny as Joe Orton, as sweetly compassionate as Peanuts, and at the same time metaphysically profound. It concerns Vivian Bearing, a formidable literature professor who specializes in poet John Donne. As she succumbs to ovarian cancer, we have the profoundly moving experience of seeing her purged of her draconian reserve, returning to childhood innocence in preparation for death. In the final haunting image, we see her stripped naked, posed as an angel heading to the great beyond. Edson may not be a great playwright in the traditional sense, but she has written a work that is cleansing to the emotional palate.

Director Sonya Robbins wisely directs with the same forthright honesty and sincerity as the New York production. Yet, lifting the evening from competent to inspired is Catherine Albers as the dying professor. With her chiseled, aquiline features and commanding diction, Albers has made it easy for audiences to imagine her as Medea slaughtering her kiddies or as Eleanor of Aquitaine bossing the king around. Here, appropriating the role of a lifetime, there's a new warmth and humanity to her acting.

Judging by the jubilance elicited by the William Finn-James Lapine musical A New Brain, Beck Center seems to be hurtling into a golden age. This sung-through musical dynamo, about the outrageous fortunes of a kiddie-show songwriter undergoing brain surgery, can best be described as a collaboration between Dr. Seuss and James Thurber, musicalized by a Sondheim disciple.

The choice of this fresh piece of whimsy was brave and imaginative, and the results are inspired. Choreographer Martin Cespedes, with the help of musical director Larry Goodpaster and director Scott Spence, makes the evening move with great speed. David Robeano manages to remain the heart and soul; with a singing voice that throbs with ingratiating sincerity, he steals affection as a cartoon Everyman. As his lover, Robert Gibb personifies narcissism as if he founded the concept. The experience can be summarized as an Al Hirschfeld caricature brought to frantic, wonderful life.