Taking Back Sunday hasn't matured -- it's only gotten louder. 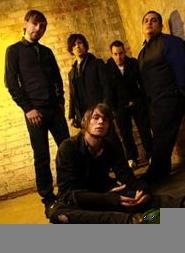 Signing with a major label is a lot like playing the lottery. While some people win, most lose, as the MO of the major music labels is generally to sling a bucket of crap against the wall and sees what sticks. Even talented acts can get lost in the shit.

Late last year, emo powerhouse Taking Back Sunday leaped into the arms of Warner Brothers, disregarding the cautionary examples of those who had gone before. With the impending release of its WB debut, Louder Now, we'll learn if the group has taken a step forward or back.

"I think that we're really lucky, and we work hard to stay lucky," says bassist Matt Rubano. "I think there's a misconception out there that the independent label is the safe warm place and the good guy, and the major label is the big bad corporate world and they're the bad guys, and I don't think that could be any more untrue."

Putting aside tales of acts like TLC, which went broke despite robust album sales, or of Hank Williams III and Joe Strummer, who found their careers sabotaged by stubborn record executives, Taking Back Sunday does have one thing going for it: The band has already experienced success. Both its records went gold and combined to sell more than a million and a half, on a level where most acts struggle to sell 100,000 copies.

Rubano isn't content to cater to an established fan base. "It's like saying you want to be an actor, but you only perform in your local town's performances of The Sound of Music," he says. "You're not going to be in Hollywood based on that."

Taking Back Sunday is a long way from Long Island, where it formed in 1999. The quintet cultivated a strong grassroots following by frequent tours; by the time of its 2002 debut, Tell All Your Friends, most of its fans already had told their friends.

But the early popularity of the band's pop-hardcore hybrid strained relations within its ranks, and halfway through 2003, guitarist John Nolan and bassist Shaun Cooper left to start their own project, Straylight Run. Undaunted, the remaining members recruited Breaking Pangea's Fred Mascherino and Sleigho's Rubano, friends from the local scene. The group finished its fall tour and went right into the studio to record a follow-up, 2004's Where You Want to Be.

Full of anxious, churning guitar chords and simmering insecurity ("A Decade Under the Influence" features the frequently repeated line, "I've got a bad feeling about this"), Where You Want to Be strikes a balance between pop balladeering and tsunami-sized waves of guitar crunch. Like Superchunk refracted through Bright Eyes, TBS ups the anthemic quotient and doubles the intimacy, taking listeners down a twisting current of hope, longing, and regret.

Where You Want to Be debuted at No. 3 on the Billboard charts. Moving to a major label, with the attendant opportunities for radio play, felt like the natural next step.

"We try to use our instincts, and we try to make decisions that are going to be in the best interest of our band," Rubano says. "Whatever's going to happen is going to happen based on the fact that the music we put on it stands up. You can have all those things you were talking about -- all that access -- and if your record sucks, it doesn't really matter. So if we happen to experience some things like [major radio play], it's going to be because the record is what it is, not because there is a different name on the record company on the back of the cover."

Such notions seem awfully naive, even coming from a group that's never really been played on the radio. To its credit, its debut single, "Make Damn Sure," doesn't mark a departure as much as it focuses on the band's strengths -- pop hooks and lithe rumble. Perhaps the sound is a bit more polished, but the truth is, Taking Back Sunday has always written catchy songs.

Rubano agrees. They haven't changed the sound; they've honed it.

"The title of the record -- Louder Now -- is meant to reflect the idea that we took every aspect of our band and amplified it to the utmost extent we could. I would rather say that than that it's mature. That word doesn't sound interesting to me and doesn't evoke anything cool and exciting," Rubano says. "Its one thing to go and say this is our mature record and we've grown up and stuff, and another thing for your music to say that."

The band members spent the last two years really getting to know each other as well as recording demo tracks while on the road, which led to an even tighter album, Rubano says.

"Just by spending that much time with each other and listening to music and seeing other bands, we know what we want to accomplish, and we want this record to be a timeless rock record," he says. "We don't want it to be a burning ember that gets hot for five minutes and disappears."

Another key was teaming with producer Eric Valentine, who pushed the bandmates to do their best, forcing them to re-record their parts hundreds of times instead of bashing it out in just a few takes.

"We were drawn to him through his work with Queens of the Stone Age and Third Eye Blind," Rubano says. "He was great to be around. And he has an incredible focus level and helped us by really being that sixth objective voice in trying to make decisions about the songs, and sonically he's just an absolute genius. He really helped us capture this thing that we wanted to capture on this record, which was to make a big, fat, straight-ahead rock record, with huge guitars and drums and everything just totally blaring all the time."

While Rubano admits that stepping up to a major label can be daunting, he's reassured by the band's steady improvement, which he feels trumps any other considerations.

"Overnight success is way more dangerous and scary than something that takes years and is gradual and natural," he says. "That's how we approach everything. If we do get to some other kind of level, then it's going to be because we've been on that path a long time and not because anyone flipped a switch or turned it on."