Still in the Game

While other progressive establishments have fallen by the wayside, Gamekeeper's Tavern boldly marches on. 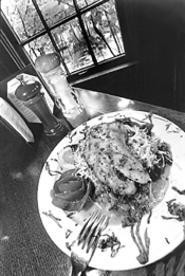 Believe it or not, there was once a time when Greater Clevelanders could pretty much count on one hand the number of exciting, forward-looking restaurants on the Northeast Ohio landscape. There was Sammy's, of course (where I first discovered rack of lamb), and the Ohio City Tavern (ditto for Oysters Rockefeller). And in sleepy little Chagrin Falls, there was Gamekeeper's Tavern, a casually sophisticated breath of fresh air in a world heretofore dominated by Brown Derby, Ho Jo, and the Big Boy. It was on the tavern's secluded flagstone patio that my eyes first drank in the shivering beauty of a glass of grassy Chardonnay, sweating diamonds in the August sun. And the ruggedly handsome dining room was where I had my first taste of sun-dried tomatoes tossed with angel-hair pasta. Here also was where I learned to appreciate warm, rustic ciabatta bread . . . and where sweet endings always meant frangible twin meringues, stuffed with vanilla Häagen-Dazs (itself a novelty) and drizzled with raspberry puree (did we even use the term "coulis" back in those days?).

Today, Sammy's and Ohio City Tavern are just sweet memories, but Gamekeeper's remains, nestled in the same quirky old building -- part restaurant, part inn, part historic landmark -- that has housed it for the past quarter-century. Meantime, the regional dining scene has exploded around it, to the point that fast-track diners can't flip a nickel without having it go kerplunk into a plateful of organic, gourmet, wood-fired something or another. But while Gamekeeper's may have slipped below the radar of many culinary trend-followers, I'm happy to report the ambiance, service, and food here have remained welcoming, worthy, and almost entirely up-to-date.

The Chagrin Falls mainstay is operated by restaurateurs Erik Heatwole and Tom Lutz, along with Executive Chef Chris Johnson; the trio also oversees the Gamekeeper's Lodge in Rocky River, Bass Lake Tavern in Chardon, and the more casual Timberfire nearby. Chef Alonzo "Lonnie" Norman is in charge of implementing the seasonal one-page dinner menu that Johnson designed for Gamekeeper's Tavern, and if it doesn't exactly cultivate brave new worlds, it's still a mouthwatering read, presently filled with tantalizing autumnal images like "roasted lemon," "warm cranberry preserves," and "currant-and-fig demi-glace." Soups range from sturdy clam chowder to apple-and-curry-scented mulligatawny; salads come barely dressed with light, fruity vinaigrettes, embellished with jewel-like red grapes, toasted walnuts, and salty Gorgonzola cheese. Despite the implications of the restaurant's name, the emphasis is mostly on mainstream meats such as chicken, veal, pork, lamb, and beef, along with trout, salmon, crab, and halibut (and one evening's special of impeccably prepared grilled swordfish). But seekers of exotica are not entirely forgotten: Farm-raised ostrich filets -- fork-tender and delicate -- show up among both the appetizer and entrée listings, and carnelian South Island elk strip loin, doused in a slightly ginny marinade of juniper berries and settled into a chunky ragout of mushrooms, onion, and crisp julienned carrot, is a succulent knockout among the main events. (A separate lunch menu offers many of the same entrées, along with a solid selection of salads, soups, and sandwiches.)

Appropriately, the concise, mostly American wine list is weighted toward big, jammy reds. We appreciated the intention behind the brief descriptions that accompany each entry: Anything a restaurant can do to encourage diners to try their hand at food and wine pairings is a plus. But unfortunately, many of the write-ups were fairly generic and not likely to be of much help to novice oenophiles. Most bottles were moderately priced, including our choice of a 1999 Cline Syrah ($25), with lots of up-front fruit and a round, soft finish. The wine proved to be a good match to the fruit and berry flavors that piqued many of the menu's main dishes, and was especially killer with a velvety herb-crusted rib pork chop, slathered with those warm cranberry preserves and served with smashing mashed potatoes and a breathtaking sweet-and-tangy roasted tomato kraut.

Beyond the usual starters and entrées, the dinner menu also includes a small listing of fancy à la carte side dishes, including temptations like grilled asparagus with tangerine vinaigrette, and scalloped sweet and Yukon Gold potatoes with roasted onion and a soul-satisfying sauce of nutty Gruyère. But unless one's appetite is truly gargantuan, these add-ons are unnecessary. The main courses are generously apportioned and typically are plated with savory side dishes, ranging from a serving of those same scalloped potatoes to roasted root vegetables to a stunning seafood couscous -- stuffed with rock shrimp, bits of smoked trout, spinach, and red pepper -- which accompanied one evening's swordfish special. And just as we remembered, our bread plate arrived stacked with thick slices of earthy, crisp-crusted ciabatta bread.

Gamekeeper's Tavern closed for nearly a month last winter for some necessary renovations and redecorating, and the spruce-up has only added to the restaurant's authentic, understated charm. New carpeting and lighting fixtures soften the warm wood paneling in the two main dining rooms, where fireplaces flickered on a rainy Thursday night; a third dining area, connecting the restaurant to the inn, has been more thoroughly made over, with new off-white wall coverings and an elegant, Colonial ambiance. The small barroom, overlooked by stuffed and mounted trophies and yet another dining room tucked into a second-story loft, is dark, cozy, and thoroughly unpretentious, and hummed with a handsome young crowd during a Saturday-night visit. And the pretty outdoor patio, surrounded by mature trees and gardens, has plenty of heaters to make it a welcoming stop well into the autumn.

The dining rooms' highly polished wooden tabletops gleam in the light of shaded oil lamps, and heavy white plates provide a suitable backdrop for the kitchen's colorful materials. While presentation is far from fussy, artistic garnishes included a trio of paper-thin apple slices, fanned out from a cloud of mashed potatoes, and a thick slab of roasted lemon, which doubled as a receptacle for a pool of sunny lemon-rosemary sauce.

That zesty sauce was the crowning touch for a moist skin-on chicken breast, with a richness and intensity of flavor that no austere, skinless piece of poultry can hope to duplicate. All herby and tender, the dish was a surprise hit with one companion who had initially complained of having "entrée envy" after watching us dig into our rosy-red rack of lamb, an aromatic marriage of well-seasoned meat and a sweet and savory sauce of currants and figs. (She was right to beg for a taste, of course: The eight-bone rack was so good, we couldn't resist picking up the dainty bones for a few surreptitious nibbles.) In fact, the only true disappointment we encountered in the course of sampling more than a dozen dinnertime dishes was in an appetizer of chicken satay. The three skewered lengths of meat were chokingly dry, and the ho-hum sesame-teriyaki sauce was not exciting enough to redeem them.

On the same note, the small collection of dessert offerings left us pining for something more enticing. Oh, for a tawny pumpkin crème brûlée, we thought, or a portion of dense and saucy bread pudding -- anything that could support the menu's hearty autumn theme. But no. Instead, our choices ranged from a slice of bland, too-summery Key lime pie to a slab of dried-out gingerbread, topped with good-quality vanilla ice cream and caramel sauce, but still too lackluster to hold our attention.

But those quibbles are minor. Overall, Gamekeeper's Tavern remains well worth a visit, for its good-looking rusticity, its seasonal menu, and its deeply flavored, attentively prepared dinners. And if afterward, a stroll through the picturesque village streets ends with an ice cream treat or a mug of hot cider from the venerable Popcorn Shoppe (53 North Main Street), not to worry: It's harvest season, after all, and time to live juicy.