Dickens' classic gets twisted for laughs at Cleveland Public Theatre. 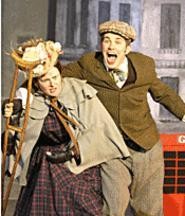 A large sampling of today's right-wing nutjobs are of the opinion that subversive retailers are trying to steal Christmas by saying "Happy Holidays" rather than "Merry Christmas" to their shoppers. This Yuletide Gestapo even wants you to boycott stores that don't intone the correct seasonal salutation, and to hell with how those of a religious persuasion other than Christianity feel about it. Yes, people go a little bonkers during the crazily busy, overindulging, hyperspending weeks that lie between Thanksgiving and whatever damn winter gala you observe. Which is why we all need to take a deep breath and chill.

For those of us who prefer our holiday eggnog with a healthy squirt of Ronrico 151, Cleveland Public Theatre has brought back Mrs. Bob Cratchit's Wild Christmas Binge. This careening parody of the Dickens classic A Christmas Carol offers many of Chuck's characters, plus a few throw-ins from Oliver Twist, It's a Wonderful Life, The Gift of the Magi, Touched by an Angel, and The Queen of Mean (the Leona Helmsley biopic). As for the basic story, you know the drill: Shilling-squeezing Scrooge is visited by three spirits who toss him in the time scrambler and coach him on the ways to be nice to people. But in Christopher Durang's demented tale, nothing is taken seriously except for a deep desire to screw with every Christmas cliché in sight.

To start with, Mrs. Gladys Cratchit is such a borderline sociopathic mess, Dr. Phil would set aside an entire week to scream nasty, brain-addled epigrams at her. Of course, it's not all her fault, since she's beset by her dippy hubby, Bob, who keeps bringing abandoned infants to their hovel for her to feed and clothe (in this 1840s London, foundlings are as ubiquitous as Starbucks, though not as obnoxiously cheery). Gladys just locks her ever-growing brood in the root cellar while she keeps a couple of the older urchins nearby so they are easier to torment.

Meg Chamberlain reprises her take as Gladys, snarling like a cornered ferret and longing for a case of Zoloft. "Maybe I'm losing my mind," she chirps; "that would be a nice Christmas present." As Bob, Tom Weaver is thin as the Dickens and an ideal foil for Chamberlain's rampaging domestic hysteria. Even when the Missus goes off to a bar before tossing herself in the river, then is magically transported back to her family dripping wet, Weaver's oblivious Bob keeps smiling and leading his brood in their tortured holiday rituals.

Of course, this is all being observed by Scrooge, who's given a lustily puckered portrayal by Randy Rollison (he also co-directs with Gregory Vovos). This is a Scrooge so vile, he makes the Wal-Mart Waltons look like the Teletubbies. Whether he's compelling his poverty-stricken employee Cratchit to slap himself silly or donate half his pathetic salary to buy "energy units" being peddled by Ken Lay and Dick Cheney, Rollison is deliciously craven -- even tender -- as he gradually falls for his soul mate, Gladys.

Meanwhile, the visiting spirits are all tormented by an invisible time-travel vehicle that handles like a 1980 Chevette on wet pavement, depositing both phantom and Scrooge in the Cratchits' living room instead of other pre-scripted destinations. As each of the spirits, Nina Domingue is consistently amusing, but never quite finds the key to making Past, Present, and Future as distinct and hilarious as they might be. This flaw may be in Durang's script, since he doesn't allow Scrooge and his ethereal tormentors to fully engage, in lieu of the traditional howling, chain-rattling shtick.

Smaller roles are played with gusto. Elizabeth R. Wood is a galumphing Little Nell, chewing on nettles when she's not being verbally pistol-whipped by her mother Gladys. And Dan Kilbane is once again the terminally plucky Tiny Tim, eyes big as empty dinner plates as he envisions the Christmas feast that never materializes. Michael Regnier ably essays a clutch of other characters, including the ghost of Scrooge's partner Jacob Marley. The two child performers, Kevin C. Ritter as a twitching, Tourette's-addled young Scrooge and Dan McCarthy as a line-deprived young Marley, make this an ideal offering for every member of your dysfunctional family.

While there is much fun to be had in this encore production, the direction by Rollison and Vovos doesn't drive the action at the manic pace exhibited before. It may be that crippled Tiny Tim doesn't fall down as frequently. Or it could be that the eventual transformation of Scrooge and Gladys into the Helmsleys doesn't have the bite it once did. After all, in the pantheon of craven and greedy bastards, Harry and Leona couldn't hold the jocks of the corporate cretins currently running this country into ruin. Somebody call Durang for an update.