Strike Up the Bland

No Michael Stanleys were harmed in the making of this Last Call production. But not for lack of trying. 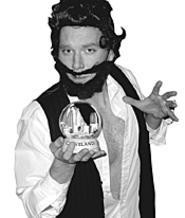 It's quite a gamble to center a 90-minute show on a regional singer-songwriter who hasn't had a hit record in more than 20 years. But comedy troupe Last Call Cleveland is hoping that the city still has much love for heartland-rocker-turned-radio-DJ Michael Stanley. It's keeping its collective fingers crossed that Michael Stanley Superstar: The Unauthorized Biography of the Cuyahoga Messiah "will be a play that Cleveland will be proud of and embrace," says member Mike Polk, who plays Stanley in the production.

The idea stemmed from Last Call's popular sketch performances, which pay mock musical tribute to Cleveland's favorite son. "This was a story that needed to be told," says Polk. Michael Stanley Superstar, however, combines real biography (he's huge in Northeast Ohio, but can't get a break outside of the area) with pure fiction (the show opens with Stanley holding a rival disc jockey hostage). "We really don't know anything about Michael Stanley," admits Polk. "We don't know anything about his life.

"But we're not totally depending on him. We're depending on Cleveland as a whole. Michael Stanley just serves as the perfect vehicle. People like Michael Stanley were our Mickey Mantles growing up," continues Polk, sliding into sarcasm. "They had it figured out: This is a tough city."

The story is just an excuse to poke fun at Stanley -- whose group, the Michael Stanley Band, was as big as Bruce Springsteen and the Stones during its peak in the early '80s -- and his anthemic but ham-fisted songs. "I remember going to Cavs games and listening to his rock anthem ["My Town"] and getting pumped up before Brad Daugherty scored 30 [points]," recalls Polk, who adds that he's "not really" a fan.

Michael Stanley Superstar also features Last Call members playing other local "cultural icons" -- Dick Goddard, "Big Chuck" Schodowski, and Linn "Barnaby" Sheldon (the former kids'-TV host narrates) -- so there are plenty of opportunities for the show to get lost in translation. But that suits Polk and his castmates just fine. "It's about the determined spirit of Cleveland," he says. "It's a love letter to Cleveland."

Stanley has been invited, but so far, Last Call hasn't heard from him. In fact, Last Callers have never met the guy they've been mocking on Cleveland comedy stages for the past few years. They didn't even bother obtaining rights to Stanley's songs for the show. "We saved ourselves the time and hassle," says Polk. "We pretty much knew [he would deny permission]." So they composed their own tunes. "We wrote music in the spirit of Michael Stanley. Luckily, Michael Stanley's songs only require knowledge of two or three chords. And you have to say a bunch of things about love and Cleveland and rocking. It's easier than you think to write 10 Michael Stanley songs."